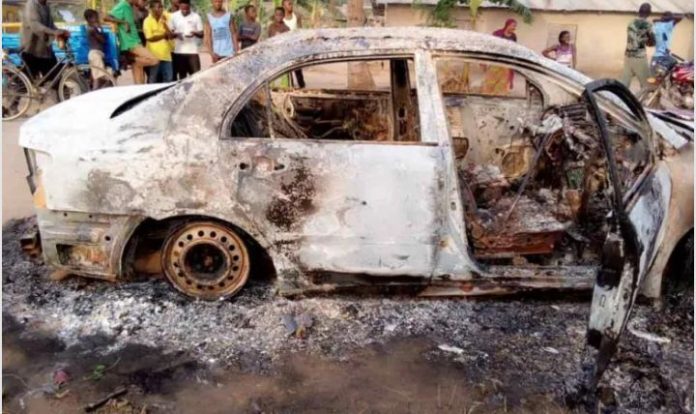 In the community near Agona in the Afigya Sekyere South District of the Ashanti Region, angry residents of Bepoase, have attacked two notorious thieves for stealing 5 goats and 1 sheep in the community.

For their operations, the thieves use a Toyota Corolla vehicle with registration number BA- 2356-14

The angry residents set fire in the car and it has burnt into ashes.

According to an eyewitness, Acheamfour Michael who narrated the incident to Pure FM’s Osei Kwadwo, he said the two suspects were arrested by some youth in the community around 2:30 am on Wednesday, January 27, 2021, when they stormed the community to steal animals.

He said, “their cover was blown when a resident who came out to urinate saw them stealing 5 goats and 1 sheep.

“After an alarm was raised, they attempted to run away with the 5 goats and 1 sheep but one guy used his vehicle to chase them and blocked them from escape. They managed to escape leaving their vehicle behind” he explained.

Residents in Kumasi express joy about the President’s ministerial nominations

He also mentioned that the community has recorded series of robbery cases for a while now which angered the residents to set the vehicle ablaze”.

Meanwhile, the assembly member for Bepoase New Town Electoral Area Micheal Opoku who confirmed the incident added that “just last week thieves came to the community to steal over 20 goats and sheep”.