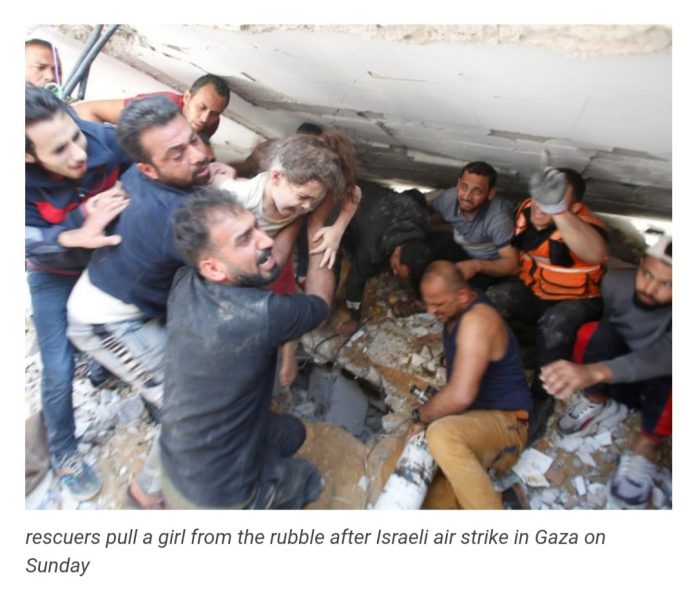 This was despite continuing international calls for de-escalation.

Overnight Sunday to Monday, Israel launched dozens of strikes in the space of a few minutes across the crowded coastal Palestinian enclave controlled by Islamist group Hamas.

Flames lit up the sky as blasts shook Gaza city.

Israel’s army said in a statement that it hit the homes of nine ‘high-ranking’ Hamas commanders, without providing details on casualties.

The overnight bombardment also included a third round of strikes on what the army calls the ‘Metro,’ its term for a Hamas underground tunnel network.

In total, 197 Palestinians have been killed in Gaza, including at least 58 children, and more than 1,200 wounded since Israel launched its air campaign against Hamas on May 10 after the group fired rockets.

The heaviest exchange of fire in years was sparked by unrest in Jerusalem.

In Israel, 10 people, including one child, have been killed and 294 wounded by rocket fire launched by armed groups in Gaza.

After a night of heavy Israeli air strikes on areas across the Islamist Hamas-run enclave, Israel’s military said Gaza militants had fired about 60 rockets towards Israeli cities overnight, down from 120 and 200 the two previous nights.

A Palestinian sponge factory in northern Gaza was hit in a morning air strike and firefighters battled to quell the blaze, which sent plumes of smoke into the air.

With the sounds of Israeli bombardment continuing throughout the morning, Gaza residents rushed to bakeries and drugstores to stock up on bread and other essentials.

“My children couldn’t sleep all night even after the wave of intensive bombing stopped,” said Umm Naeem, 50, a mother of five, as she shopped for bread in Gaza City. “What is happening to us is too much, but Jerusalem deserves all the sacrifices.”

Hamas began its rocket assault last Monday after weeks of tensions over a court case to evict several Palestinian families in East Jerusalem, and in retaliation for Israeli police clashes with Palestinians near the city’s al-Aqsa Mosque, Islam’s third holiest site, during the Muslim holy month of Ramadan.

World concern had already deepened after an Israeli air strike in Gaza that destroyed several homes on Sunday and which Palestinian health officials said killed 42 people, including 10 children, and persistent rocket attacks on Israeli towns.

At a U.N. Security Council meeting on Sunday, the United States said it had made clear to Israel, the Palestinians and others that it was ready to offer support “should the parties seek a ceasefire”.

Prime Minister Benjamin Netanyahu said Israel’s campaign in Gaza was continuing at “full force”, and that deterrence had to be achieved to prevent future conflict with Hamas.