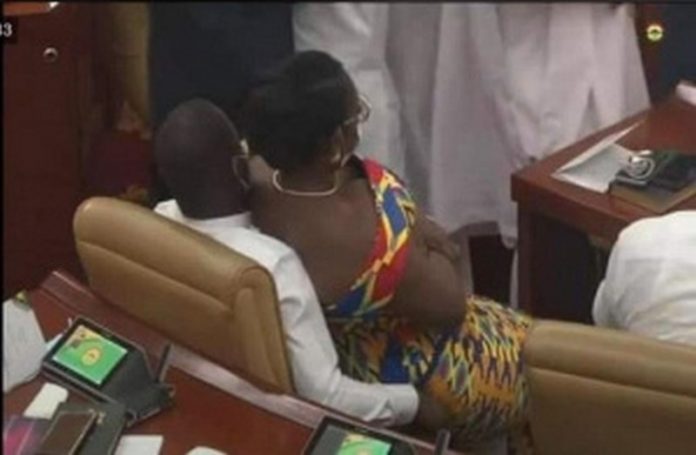 Member of Parliament (MP) for Juaboso Constituency and Ranking Member on the Committee of Health, Hon. Kwabena Mintah Akandoh has stated that Hon. Ursula Owusu-Ekuful ideally is not his kind of woman.

Speaking on Okay FM, he explained that on the lighter side he is a young man who prefers a young woman but not somebody who seems to be older than him.

“I am sure Hon. Ursula Owusu was rather enjoying me whilst she sat on my lap since I wasn’t feeling anything for her,” he said jokingly.

“My wife has even threatened to sue Hon. Ursula Owusu for human rights and domestic abuse.”

But explaining what led to Ursula Owusu ending up on his lap, he noted that they had taken over seats on the right-hand side of the Speaker as parliament had not indicated the seating arrangements of MPs as they were about to be sworn in, however, Ursula Owusu-Ekuful insisted on sitting on the seat which had already been occupied by Hon. Cletus Avorka.

According to him, Cletus Avorka had stood up to engage in an activity elsewhere which also gave Ursula Owusu an opportunity to occupy the seat again for some time.

“So after a while, she stood up and I went to occupy the seat, then from nowhere Hon. Ursula Owusu came to sit on me,” he narrated.

“Kwame, I don’t know if Hon. Ursula Owusu ‘feels’ me from afar because I can’t clearly comprehend her actions,” he added.