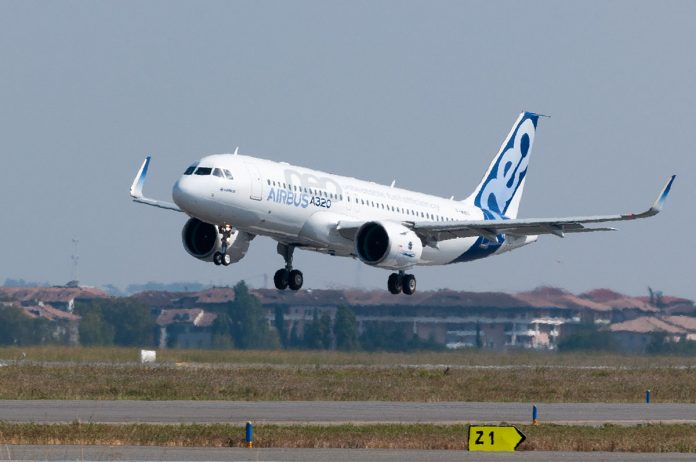 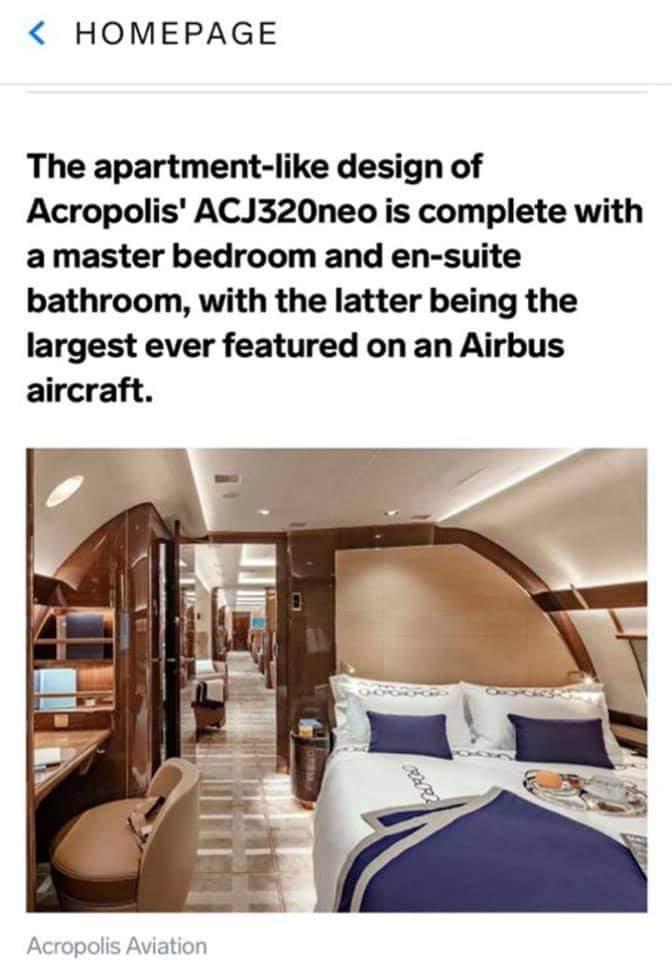 The Airbus ACJ320neo owned by Acropolis Aviation based in Farnborough, UK and registered as G-KELT is the most luxurious and the most expensive in the Acropolis fleet. The manufacturers describe it as “the most outstanding ambassador for Airbus Corporate Jets.” 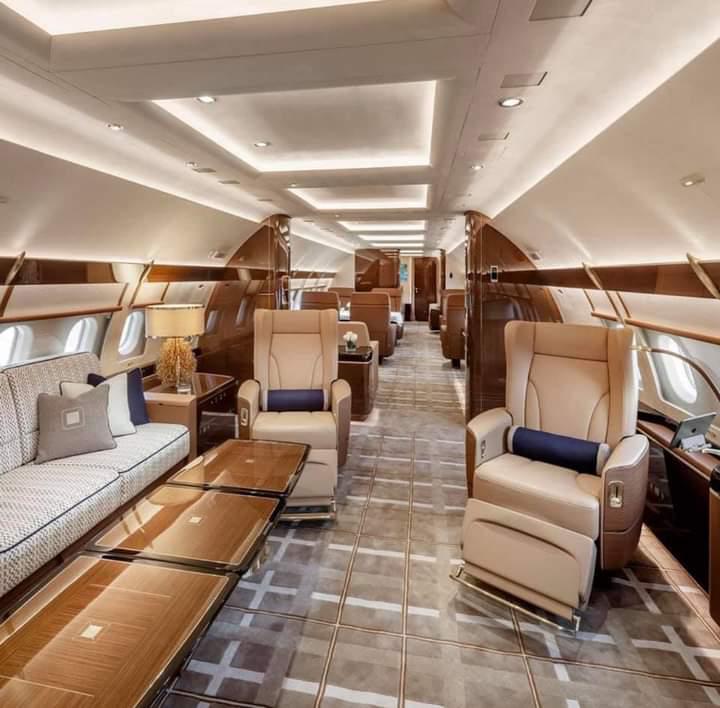 The spectacularly opulent aircraft comes equipped with a lavish master bedroom, an imposing en-suite bathroom, monarchial dining facilities and round the clock IT connectivity.

It costs the Ghanaian taxpayer approximately £15,000 an hour when President Akufo-Addo rents it.

The aircraft in issue is less than two years old and had only returned from Switzerland where it received the highest luxurious spruce up ever known in the aviation world just before President Akufo-Addo chose that particular luxurious monster.

The jet can take up to 150 people in standard configuration, but it has been configured to accommodate 17 royal passengers.

The President Nana Addo Dankwa Akufo-Addo recently went on a 10-day official trip abroad in the said chartered jet which cost the tax payer some £15,000 per hour as the plane lifted off to be used for the said duration.

Hon. Okudzeto Ablakwa took to social media to vent his spleen and condemn the Presidency for such an extravagant travel at such a heavy cost to the nation which to him had no justification at all during a period when Ghana is facing difficulties in its economic management. 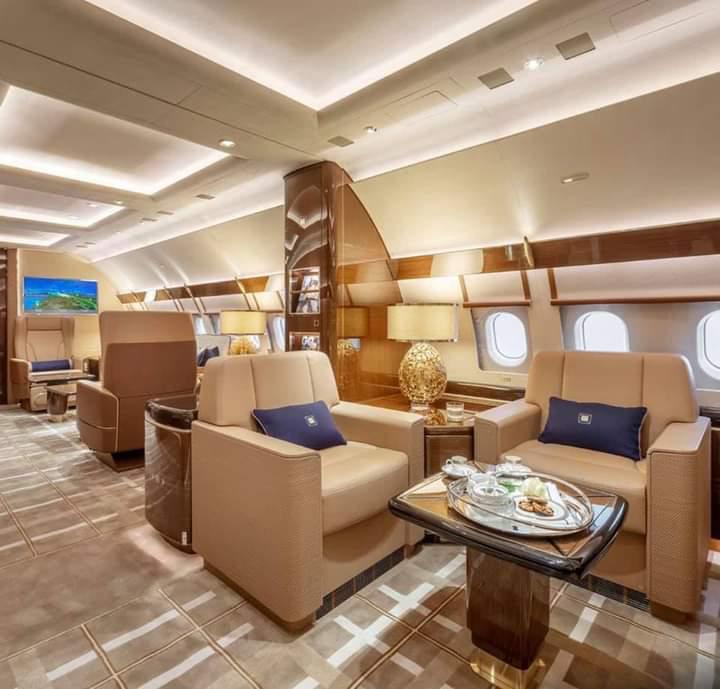 “President Akufo-Addo undoubtedly has the greatest taste any Ghanaian President has ever had but the question is, should that insatiable appetite for his creature comforts be at the expense of the suffering masses? Let’s further analyse President Akufo-Addo’s latest trip to Europe: per Flightradar24, the G-KELT aircraft left Accra with the President to Paris on the 16th of May — a 6 and half hour duration”.

Aviation experts inform me it would have cost Ghana less than 15% of this 2.8 Million Ghana Cedis had President Akufo-Addo opted for Ghana’s available presidential jet which is in pristine condition”, he said. 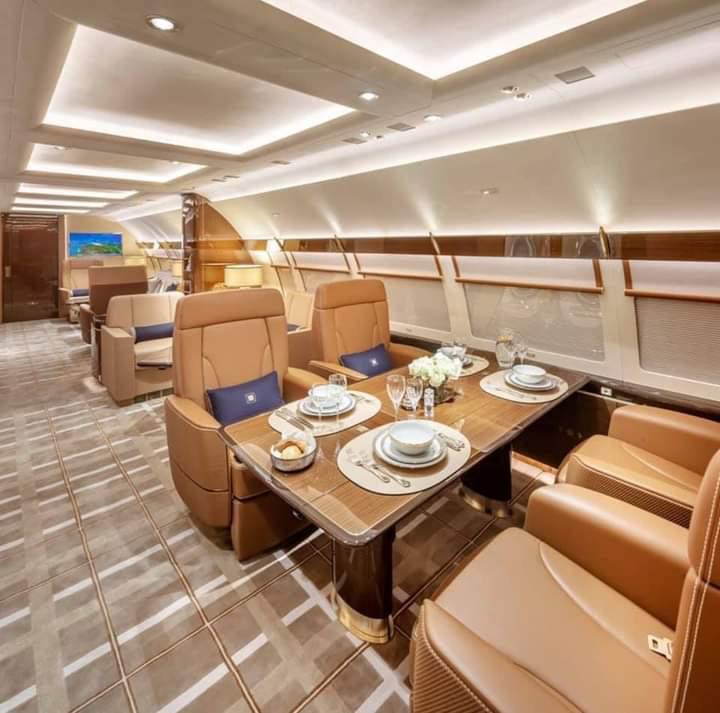 “Alternatively, far more affordable travel arrangements are available which could have aligned with the President’s rhetoric for sympathy from the west for African nations. The irony is that President Akufo-Addo engaged in this fantastic extravagance on his way to France to go beg President Emmanuel Macron for debt cancellation. Needless to add that President MacRon does not travel in such splendour”, he added.

“I have therefore filed an urgent question in Parliament to compel the Akufo-Addo administration to be accountable to the Ghanaian people on this matter and ultimately to prick their conscience to end this obscene profligacy at this time of considerable economic hardships.

The African people deserve better from their leaders.” The post concluded.

But in defence of the President’s travel abroad using the said expensive chartered jet, Nana Akomea, Managing Director of State Transport Corporation said the state of the current Presidential jet makes it unsafe for the President to use for long distance travels.

Speaking on Good Morning Ghana, he noted that since the Presidential jet almost crashed in 2018, it was advised that the President only use it for short distances and not more than 5 hour journeys.

Therefore, based on this advise, the country has no choice than to buy a new jet or charter one for the President whenever he has to travel a long distance.

“The claim that President Akufo-Addo has decided not to use the presidential jet is not true. It is not president Akufo-Addo’s decision. In fact, what has been recommended since 2018 October where they almost had a crash in America…”

“… the reports that came out from the experts in the military and so on was that they shouldn’t use that jet for long-distance travel and for more than 5 hours and ordered that either the president charters or we buy a new aircraft”, he added.

He was however quick to note that the President still uses the current presidential jet for his local travels and within West Africa.

It will be recalled that the current presidential jet, the Falcon 900-EX, was purchased by the Kufuor administration and has been in service for 11 years now. The purchase engendered so much debate, and especially condemned by the NDC, then in opposition.

It was purchased at the cost of USD$37 million to replace the aging Fokker F28 jet which had also clocked some 37 years in the service if the Presidency.

The old jet was dubbed the “flying coffin” because it had become too old and risky to be used for long presidential travels, hence the need for it’s replacement by the then Kufuor administration.

Ironically, the 48-year-old “flying coffin” is still in service together with it’s 11-year-old replacement, the Falcon-EX executive jet.