The President, Nana Addo Dankwa Akufo-Addo has released his full list of proposed sector ministers and regional ministers to the Speaker of Parliament on Thursday for vetting and approval.

Missing in the list as expected was that of the Senior Minister position, which used to be occupied by Mr. Yaw Osafo Maafo which has been abolished.

A statement from the Presidency said seven other Ministries have been scrapped for Akufo-Addo’s second term of office.

They are the Ministries of Aviation, Business Development, Inner City and Zongo Development, Monitoring and Evaluation, Planning, Regional Re-organisation and Development, and Special Development Initiatives.

These positions used to be occupied by some senior members of the NPP party, but as things look now, they might not be seen again traversing the corridors of power as it used to be in the first term of Nana Akufo-Addo’s administration.

In all, the President is has approved 46 Ministerial appointees, made up of 30 Ministers and 16 Regional Ministers.

The statement also added that the President will appoint a Minister for Public Enterprises, who would operate under the Presidency.

Below is the list of appointees who will be vetted by parliament in the coming days. 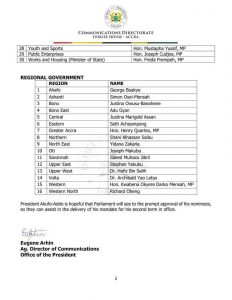 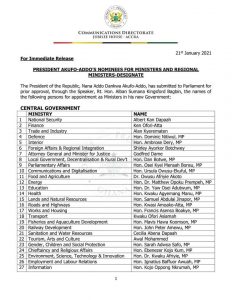