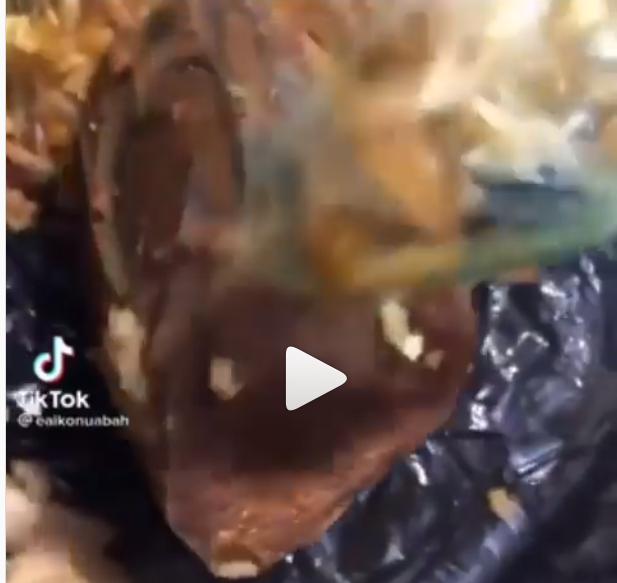 A video that is making rounds on social media shows a snake being part of some rice a woman bought from some restaurant in Accra.

Ghana is becoming a place for both good and evil people, with a population of a little over 30million, many are being thought of by strangers and some are just being wicked because of the hard economy.

Yes meat in the capital is expensive, but with diverse cultural difference in a country like Ghana, you might just be killing somebody by serving him/her with something they taboo.

Snake is something that might be considered normal in a country like china, but newstoday last check shows more than 95% Ghanaians would not dare touch snake let alone have it in their meals.

According to a guy, who’s name is still unidentified, His aunt went to Accra and after feeling hungry decided to branch to the nearest restaurant to get some food and requested meat.

The food was served with meat and upon reaching her destination to eat the sumptuous meal she realized the meat was strange and upon further checks discovered the meat was that of a snake.

News Citizen Atare - March 7, 2021 0
The President Nana Addo Dankwa Akufo-Addo has presented a list of 33 appointees to the Council of State for consideration for ambassadorial roles to...

After 70 years in Marriage and a last nap together, death carry both together