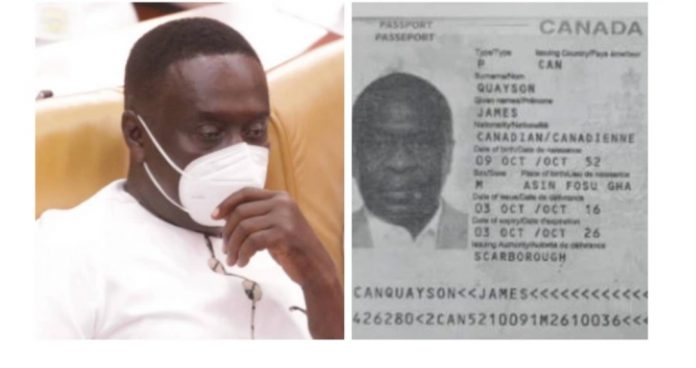 The Assin Magistrate Court has finally signaled that it will soon reopen the case of NDC Member of Parliament Hon. James Quayson over his alleged possession of dual citizenship.

This was disclosed by the Clerk of Parliament who explained in a recent interview monitored by newstodaygh.com that the case has not been cancelled and will be opened soon.

For the members of the opposition National Democratic Congress (NDC) in Parliament, it will spell bad news if they lost the case in court.

But for the ruling New Patriotic Party (NPP), it will be very good news for it’s members in the Assin North Constituency because it will give them a golden opportunity to snatch the parliamentary seat from the NDC.

It will be recalled that the Assin Magistrate Court had served the then MP-elect with an injunction on the eve of Ghana’s 8th Parliament coming into force. The court injunction sort to prevent him from being sworn-in as Member of Parliament for the Assin North Constituency. But the MP-elect defied the court order and went ahead with the swearing-in with the full support of the NDC cocus in Parliament.

As a result of that, the court could slap the encumbent MP with contempt for ignoring an order restraining him from being sworn-in as Member of Parliament for the Assin North Constituency.

The court could also annul the December 7, 2020 Parliamentary elections results of the Assin North Constituency if Hon. James Quayson is found guilty of the allegations for not renouncing his dual citizenship before presenting himself to be elected into Parliament.