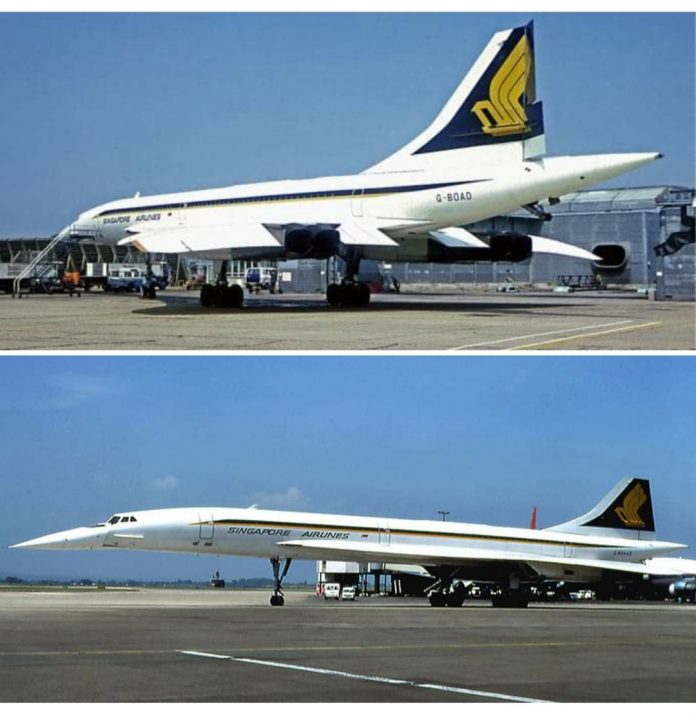 Aviation Facts: The time when Singapore Airlines operated the Concorde.

In the Concorde story, you always heard about British Airways and Air France who were the only two main operators of the aircraft.

Singapore Airlines also operated Concorde for a few months of its history.

It is a small part of the aircraft’s history, but an interesting one.

From the pictures above, the Concorde looks amazing in Singapore Airlines livery as well, but only two pictures were available during the time of writing this article.

This is probably why the first scheduled service went to Bahrain as it is on the way.

The continuation to Singapore started on December 9, 1977 as a cooperative service between Singapore Airlines and British Airways.

For the service itself, Concorde G-BOAD was painted in Singapore Airlines colours on one side, and as a result, this aircraft usually operated the Singapore route.

Four days after the service started, it was withdrawn.

Reason were that the Malaysian Government complained about the sonic boom over the Straits of Malacca. How unfortunate!

Before services commenced, it was the Indian Government who were causing the headache as they refused permission for Concorde to fly over their territory.

The airlines bargained, but in the end they rerouted around the country thus adding 200 miles to the original route.

The Indian Government then tried to demand more access to London Heathrow for Air India in exchange for Concorde overflight rights.

Governments have long used air service agreements in their game of political chess.

With the issue concerning Malaysia, Singapore Airlines was a great competitor of Malaysian Airlines, so that was one aspect. The other one was that Malaysia was trying to use the carrot of Concorde access to gain fifth freedom rights out of London Heathrow. But that didn’t work out either.

Eventually the airlines decided to avoid Malaysia as well. This also added more complexity to the route.

However, regular services restarted on January 24, 1979 but it did not last.

Eventually, Concorde finished serving the Singapore route on November 1, 1980 with flights being withdrawn due to low load factors.

Apparently it was loosing some £2 million each year which didn’t make business sense.

Having to fly subsonic over various portions of the route as well as diverting around India and avoiding Malaysia also didn’t help matters at all.

So in the end, the planned regular scheduled services on the rest of the route through to Australia never materialised as a result of the fall out from economic loses the airline had to endure.

VIP announces 22% increase in fares across board