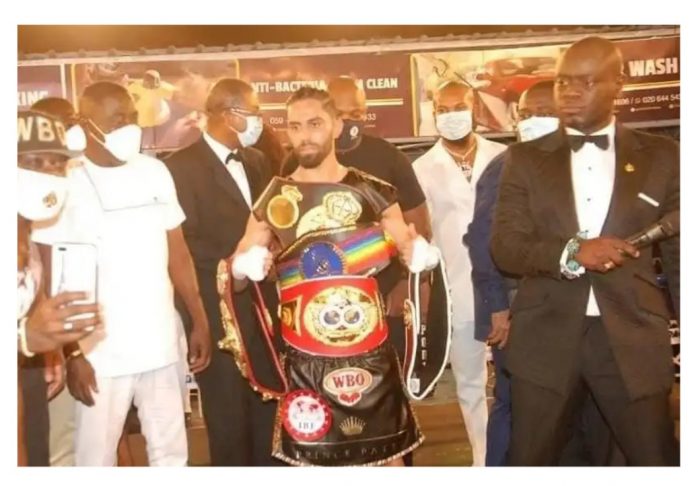 British super-flyweight Prince Patel pushed his record to 24-2-1 with a ninth-round stoppage of Julias Kisarawa in Accra, Ghana.

From the stat, Patel used his hand speed and good movement to outboxed the limited Kisarawa.

The Tanzanian did a bit better as they traded punches in the second. But it was obvious he lacked the power to trouble Patel.

After fighting southpaw for two rounds, Patel switched guard in the third and scored well with body punches.

Kisarawa kept busy in the fourth, but Patel hurt him with some solid rights.

Patel upped his pace, put Kisarawa down in the fifth, and applied more pressure after the eight count.

Kisarawa went down on one knee in the sixth under a shower of punches but survived to the bell. Patel continued the pressure in the seventh and eighth, and in the ninth, Kisarawa was stumbling with exhaustion.

He was hardly able to lift his hands. The referee stopped the fight.

Patel was too good for a very limited and sloppy Kisarawa as he gets his nineteenth inside the distance win.

Kisarawa lacked the skill or power to pose a threat, but he did better than when facing Patel in 2018.

Back then, he lost in five rounds.

Tetteh was giving away 40lbs in this fight, but that just meant he was facing an obscenely overweight 40-year-old Osumanu.

It took Tetteh a little while to get rolling. But he eventually wore down Osumanu, who retired at the sixth round.

Tetteh lifts the WBA Pan African title, but some realism appeared on his heavily padded record when he was stopped inside a round by Daniel Dubois in September 2019.

Both of Osumanu’s losses have been retirements.

No problems for Sackey as he retains his WBO African title-winning every round.

Sackey, 26, was 22-0-1 before being knocked out by the instrumental Wasiru Mohammed in 2018. He re-established himself with the win.

Former Commonwealth title challenger Laryea put together a 16-0-2 run but then suffered losses when over matched against Martin Ward and Albert Pagara.

Neymar, Pulisic star as PSG and Chelsea progress to the semi finals.