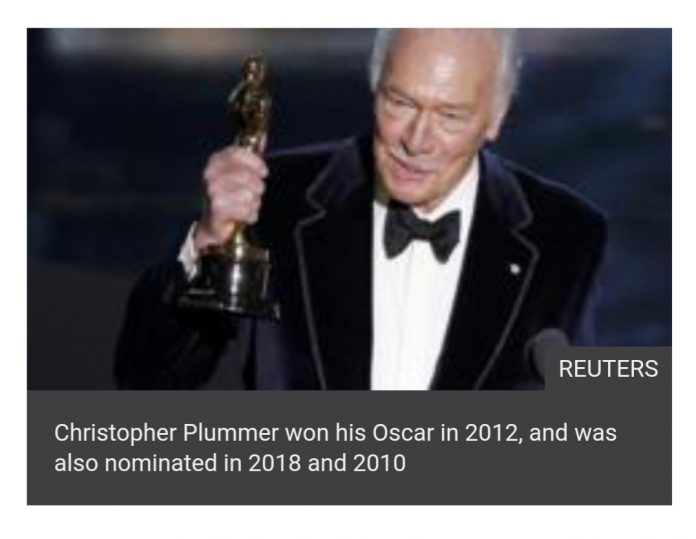 Christopher Plummer, the distinguished Canadian actor best known for his role as Captain Von Trapp in The Sound of Music, has died at the age of 91.

He won an Oscar in 2012 for the film Beginners and was also nominated for The Last Station in 2010 and All the Money in the World in 2018.

In the latter film he replaced Kevin Spacey, whose performance as billionaire J Paul Getty was removed.

His many other films included The Man Who Would Be King and Knives Out.

He was a memorably villainous Klingon in the sixth Star Trek film and played TV anchorman Mike Wallace in 1999’s The Insider.

He also played Sherlock Holmes in Murder By Decree and appeared with Peter Sellers in The Return of the Pink Panther.

According to reports, Plummer died peacefully at his home in Connecticut with his wife Elaine Taylor at his side.

Lou Pitt, his long-time friend and manager of 46 years, remembered him as “an extraordinary man who deeply loved and respected his profession”.

“He was a national treasure who deeply relished his Canadian roots,” he continued.

“Through his art and humanity, he touched all of our hearts and his legendary life will endure for all generations to come.

“He will forever be with us.”

Sound of Music co-star Dame Julie Andrews said in a statement to the PA news agency: “The world has lost a consummate actor today and I have lost a cherished friend.

“I treasure the memories of our work together and all the humour and fun we shared through the years.”

The Academy of Motion Pictures Arts and Sciences, which awards the Oscars, said he “beguiled audiences across generations”.

We’re saddened to hear of Christopher Plummer’s passing. His legacy as ourh Captain will live on in THE SOUND OF MUSIC forever.

Bill Gates Under Investigations By His Own Company-Could Lose Billions

Read What Happens To You After Death