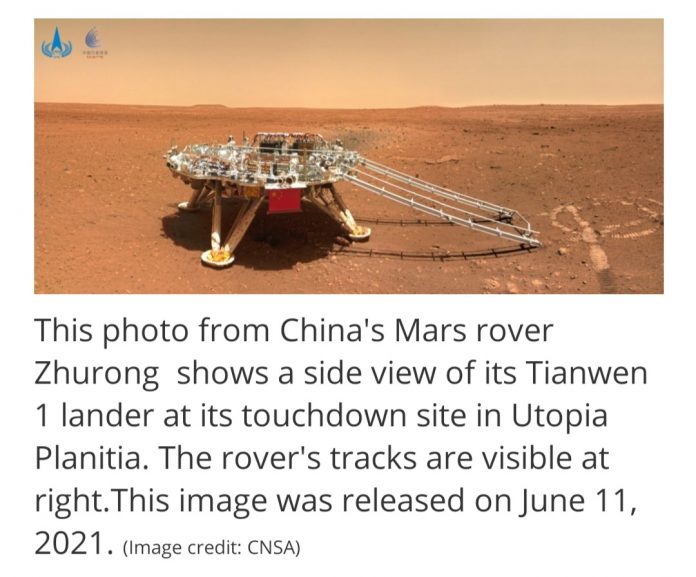 China’s Mars rover Zhurong poses for a self portrait with its lander in this photo from Utopia Planitia released on June 11, 2021. (Image credit: CNSA)

China’s Zhurong rover, which landed on Mars on May 14, has sent a new batch of images to Earth — including a “family photo” featuring the rover together with its rocket-powered landing platform posing for a camera on the rock-covered surface.

The rover took this selfie by dropping a camera attached to its belly about 10 meters (32 feet) away from the landing platform, then positioning itself next to the landing platform, Chinese space officials said. The camera wirelessly transmitted the picture to the rover, which then sent it to Earth via the Tianwen-1 orbiter.

The China National Space Administration (CNSA) released the image together with a 360-degree panoramic view of the landing site that Zhurong took with its navigation terrain camera while it was still atop the landing platform.

The CNSA also released a photo of the landing platform taken from about 20 feet (6 meters) afar. The images show the flat terrain of the huge Martian plain Utopia Planitia covered with small rocks. 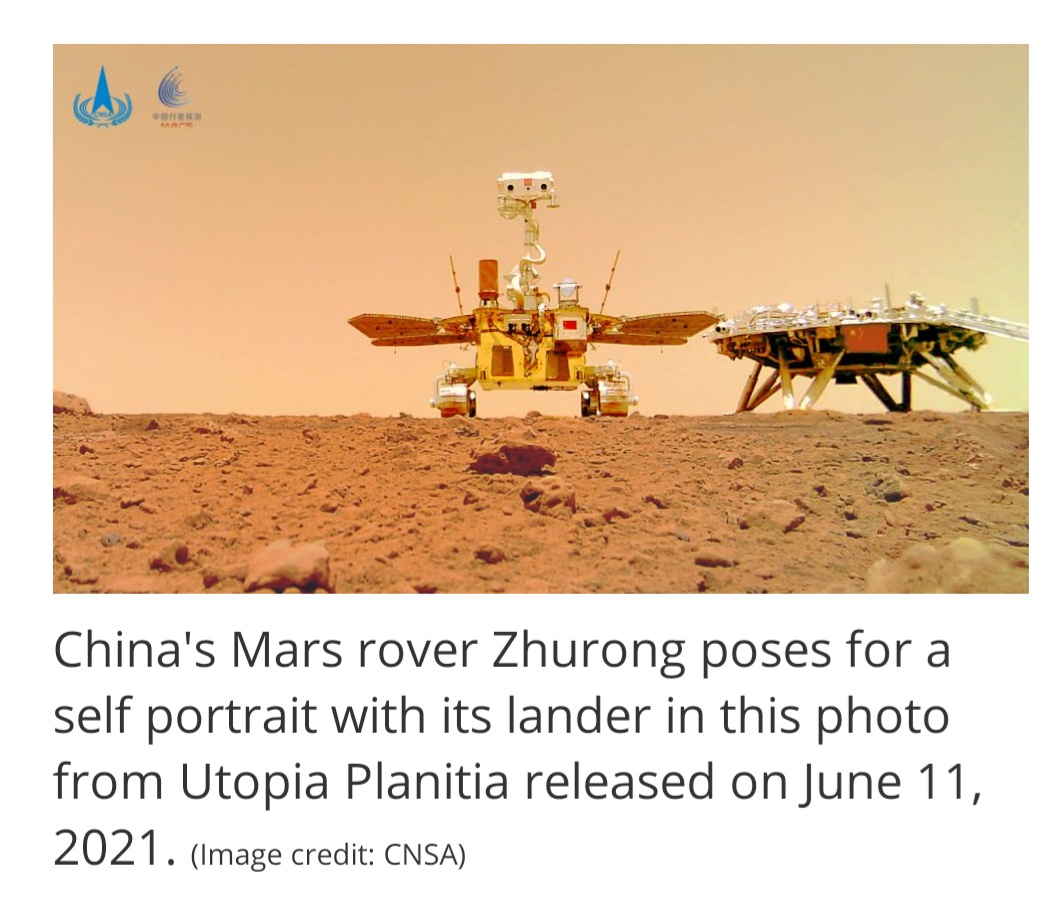 This photo from China’s Mars rover Zhurong shows a side view of its Tianwen 1 lander at its touchdown site in Utopia Planitia. The rover’s tracks are visible at right. This image was released on June 11, 2021. (Image credit: CNSA)

The 530-lb. (240 kilograms) Zhurong rover, named after an ancient fire god from Chinese mythology, is part of China’s Tianwen-1 mission, which launched in July 2020 and arrived in Mars orbit this past February.

On May 14, Zhurong and the landing platform separated from the Tianwen-1 orbiter and touched down, pulling off China’s first-ever Mars landing.

In addition to high-resolution cameras, the rover is fitted with a subsurface radar instrument, a multi-spectral camera and surface composition detector, a magnetic field detector and a weather monitor.

This panorama from China’s Mars rover Zhurong shows the vast flat plain of its Utopia Planitia landing site. The rover’s solar arrays and deck are visible at left and the wheel ramps on its lander can be seen at right.  (Image credit: CNSA)

The rover is expected to spend at least 90 days mapping the area, searching for signs of water ice, monitoring weather and studying the surface composition.

The Tianwen-1 orbiter, which relays data from Zhurong but also gathers scientific data about the planet’s surface and atmosphere, is expected to operate for at least one Mars year, which is 687 Earth days.

A view of the flat terrain around China’s Mars rover Zhurong near its Utopia Planitia landing site released by the China National Space Administration on June 11, 2021. (Image credit: CNSA)

Earlier this week, the CNSA released images from the Tianwen-1 orbiter capturing the Zhurong rover and the landing platform on the surface of Mars.

In the images, a dark area can be seen surrounding the landing platform, which might be a result of the rocket engine firing during the landing, Chinese officials said in a statement.

The image also shows bright stripes probably formed by fine dust when the landing platform released residual fuel. The back cover of the entry capsule and the jettisoned parachute can be seen as bright spots at the center of the image.

The heat shield can also be seen in the lower left section.