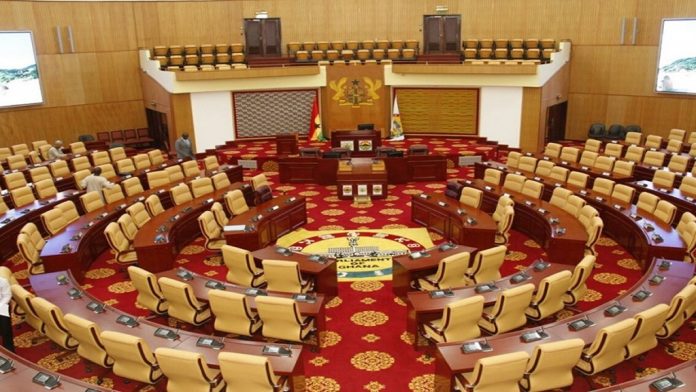 The error which is the result of the printer’s devil is the sole responsibility of the author and did not actually reflect the true picture of proceedings on the floor of the House that day.

The inconvenience the misleading headline has caused our stakeholders and numerous followers is deeply regretted.

However, the import and content of the reportage of the proceedings remain same.

The Speaker of Parliament Rt. Hon. Alban S.K. Bagbin on Tuesday expressed his disquiet that His Excellency the President Nana Addo Dankwa Akufo Addo did not consult him, as the leader of the House prior to the release of the appointees nominated for the Council of State which require consultation with Parliament.

This follows the publication of some names for appointments unto the Council of State by the Acting Director of Communications at the Presidency Mr Eugene Arhin listing the names of appointees to the Council.

Mr Eugene Arhin in a statement among other things said the President, subject to consultation with Parliament, has also appointed, in accordance with Article 89(2)(a)(i)(ii) and (iii), Georgina Theodora Wood, a former Chief Justice, Lt. Gen. J.B. Danquah, a former Chief of Defence Staff of the Armed Forces, and Nana Owusu Nsiah, a former Inspector-General of Police, to the Council.

The Rt. Hon. Speaker noted this development constitutes a breach of Article 89(2) of the 1992 Constitution and in that regard announced that a message will be conveyed to the Office of the President for the appropriate thing to be done.

The Minority Leader Haruna Iddrisu before the commencement of public business on Tuesday February 02, 2021 indicated that the statement from the Communication Directorate was in contravention of the Constitution as no such consultations had been done with Parliament.

He expressed concerns about the President’s failure to first notify the Speaker and also consult Parliament on these appointments specified in by Article 89(2)(a)(i)(ii) and (iii) of the 1992 Constitution of a former Chief Justice, a former Chief of Defence Staff and a former Inspector-General of Police (IGP).

The Tamale South lawmaker stressed that Article 89(2) requires that these category of members of the Council must be appointed by the President in consultation with Parliament adding that appointments of this nature is a shared responsibility between the executive and legislative arms of government.

The President has not consulted Parliament on Council of State appointees – Speaker.

He said the Presidency must respect the institution of Parliament headed by the Speaker for such communications to formally come from the Speaker as official correspondence because the Council of State has a role to counsel the President and MPs should know those who are counselling him so that they can assess whether they will be giving him good or bad advice.

However, the Rt, Speaker ruled that the concern of the Minority Leader was with Article 89(2) which requires the appointment by the President in consultation with Parliament a former Chief Justice, a former Chief of Defence Staff of the Armed Forces of Ghana (iii) and a former  Inspector-General of Police.

He said he had not received any communication from the President in this respect neither verbal nor written, formal nor informal and that the Minority Leader was right in drawing the attention of the House to this constitutional infraction.

Politics Latif Ahmed - February 27, 2021 0
Mr Kojo Yankah write: Today, Ghana has been classified as one of the poorest countries to receive vaccines from India. Very well. As a country...