Canadian rapper Drake, has postpone the release of his next album.

Taking to social media Drake has announce the postponement of his next album ‘Certified Lover Boy’while recovering from surgery.Drake took to his Instagram stories to announce this news.He has explained that the album’s release was supposed to be this month, but between his surgery and rehab, he has dedicated his time to recover.

However, Drake assures that, the release of the “Certified Lover Boy” album will be this year.

He wrote,
“I was planning to release my album this month but between my surgery and rehab my energy has been dedicated to recovery.”

“I’m blessed to be back on my feet feeling great and focused on the album, but CLB won’t be dropping in January.

Though, Drake has not shared any information on his surgery or what happened.
However, in October last year, there was a photo of his leg in a brace which he uploaded.
This prompted speculations that the rapper has suffered a knee injury. 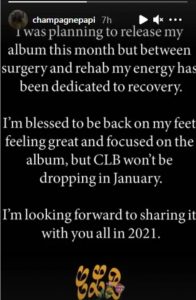