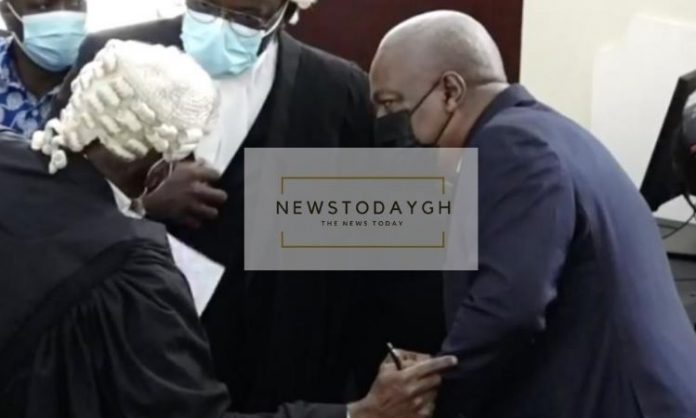 Lawyers for former president, John Dramani Mahama, in the ongoing election petition hearing have been struggling to convince the seven -member panel why they refused to file their witness statement as directed by the Court.

The seven member panel on the 20th of January, 2020 asked the petitioners to file their witness statement by close day 21st January 2021.

However, Counsel for the petitioner failed to comply with the directive despite the first respondent(EC Chairperson) and the second respondent (President Akufo Addo) doing so.

In its sitting today, Tuesday 26th January 2021, lawyer Tony Lithur one of the lawyers for Mr Mahama told the judges that their side has also filed for an appeal of its earlier decision on the interrogatories filed by Mr. Mahama.

According to Mr. Lithur, the stay petitioners wanted the court to rule on that application before they file their witness statement.

The judges however did not accept the explanation, insisting that the application for review on the interrogatories and stay of proceedings cannot stop the processes for the of hearing.

The court subsequently went on recess over the matter in less than 10 minutes of sitting.

The seven-member panel expressed disquiet over the petitioner’s disregard for its orders to file a witness statement.

The Judges, therefore, ordered petitioners to file witness statements by tomorrow 27th January 2021 or else the court may be compelled to invoke rule 79 of its orders which enabled the court to through away any case brought before it under such circumstance.

Meanwhile hearing has been adjourned to Thursday 28th 2021.