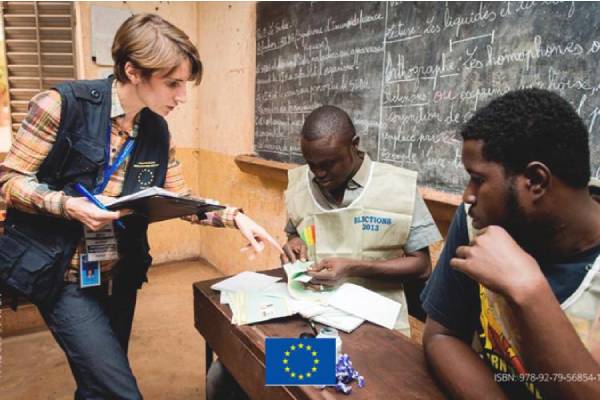 The European Union’s Election Observation Mission (EOM) final report on Ghana’s 2020 election has revealed that the collation of results at the constituency level was less transparent.

Excerpts of the report stated that this was due to a lack of detailed procedures, inadequate facilities, and overcrowding which at times led to agents and observers not having a clear view of the process.

“Voting was conducted in a generally peaceful atmosphere and voting procedures were mostly followed, including the biometric verification of voters.

EU EOM observers reported several irregularities, such as voters not always marking their ballot in secrecy, mainly due to the poor layout of polling stations, and biometric verification devices not always able to successfully verify the voters.

“Party agents from both NPP and NDC were present in all but one polling station visited. The overall conduct of voting was assessed positively in 95 percent of the 329 polling stations observed. The EC deployed COVID-19 “ambassadors” to polling stations to enforce health protocols.

“The counting process was assessed positively and it was conducted in a largely transparent manner and always in the presence of party agents who in all cases received signed copies of the result forms.

However, in more than half of the polling stations observed, result forms were not publicly displayed. Furthermore, presiding officers appeared to have difficulties completing the result forms.

Collation of results at the constituency level was observed in 35 constituency collation centers with many of them being visited repeatedly.

“The collation process was less well organized and less transparent often due to a lack of detailed procedures, inadequate facilities, and overcrowding which at times led to agents and observers not having a clear view of the process and the filling in of result forms.

Instances of unrest and tension were observed in Asawase, Sunyani West, and Techiman South constituencies. The results were collated in the presence of party agents and observers and key transparency measures were adhered to.”

The report also stated that the ruling NPP was highly favored by the state broadcaster than its main competitor, the NDC.

According to the report, 26.2 percent of airtime on election-related news programs focused on activities of the NPP while 15.8 percent was allocated to the opposition National Democratic Congress (NDC).

“GBC, overall, provided a fair opportunity to all political contestants through various programs aired by both GTV and Uniiq FM.74 Nevertheless, the EU EOM’s media monitoring findings show that GTV favored the NPP by allocating it 26.2 percent of airtime in its election-related news and programs, compared to 15.8 percent allocated to the NDC.

“Furthermore, the NPP and its presidential candidate benefited from extensive additional coverage on GTV (22.1 percent of airtime) through news and live broadcasts of inaugurations and projects launched by the President or government representatives, often including campaign songs and messages.

Focusing only on the coverage received by presidential candidates, the difference of airtime is slightly higher, with Nana Akufo-Addo receiving 33 percent and John Mahama receiving 19.1 percent of airtime in the state-owned TV.