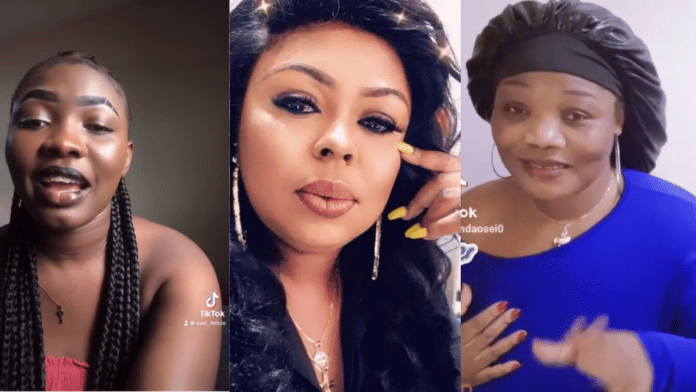 Felicia Osei has finally replied to Afia Schwar’s insults and attacks on her after the comedienne descended on her mother earlier last week.

Recall that a few days ago, Felicia Osei’s mother, Maa Linda, stormed the internet to cry her eyes out after some social media users and Afia Schwar accused her daughters of selling their bodies for money.

The “ashawo” accusations from Afia Schwar stemmed from the fact that Maa Linda refused to allow Nayas’ iPhone saga to die on the internet.

According to reports, Nayas relocated to the home of the new man, whom she referred to as “Owura.”

After she moved in with him, he kept her as a “housewife,” making her do all the household tasks and engaging in intimate behaviour while maintaining the impression that they were in a committed relationship.

Nayas complained in the tape that her new lover had promised to get her an iPhone 13 pro max but had broken his word.

Afia Schwar who was keenly observing the proceedings of the whole saga jumped to Nayas’ defence.

According to Afia Schwar, this same Maa Linda was the one who described her innocent twins as Fulani herdsmen meanwhile she has never attacked her before.

She also asked her if she has ever thought of the fact that the people she mocks are also children of someone else after accusing her daughters of being prostitutes.

Felicia Osei who’s pained over how Afia Schwar blasted her mother and her siblings has finally broken silence on the whole beef.

Speaking in an interview, she fumed at Afia Schwar for dragging her innocent self and siblings into the whole feud meanwhile it’s her mother who should be addressed and not them.

She cautioned the comedienne to be careful whenever she wants to clap back at her mother because neither she nor her siblings are the ones who advise their other to comment on trending issues.

Watch the video below to know more…

Previous articleWhat Are Friends For If They Can’t Support You When You’re Down?
Next articleMy Husband Gets Angry Anytime I ask Him, “What Will You Like To Eat?”