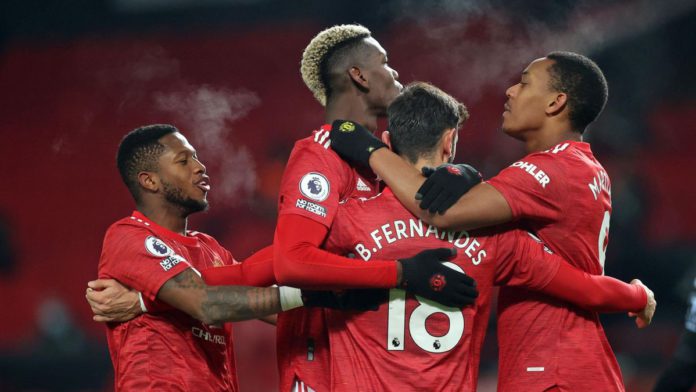 Manchester United have gone joint top of the Premier League after goals from Anthony Martial and Bruno Fernandes saw them beat Aston Villa 2-1.

United, who are now unbeaten in ten matches, carved out the better opportunities in the first half with Paul Pogba and Fred spurning good chances.

Dean Smith’s side grew into the game, with John McGinn forcing David De Gea into a decent save, but found themselves behind close to half-time when Martial headed in Aaron Wan Bissaka’s cross for his fifth of the season.

Villa had the better of an enthralling second half with De Gea forced into a brilliant save to tip Olly Watkins’ header over the bar while Hamed El Ghazi’s volley was narrowly over.

And their effort was rewarded when McGinn’s quickly taken free-kick caught United out and Grealish’s low cross found Bertrand Traore in space who tucked the ball into the net.

But United were back in front just three minutes later when Douglas Luiz conceded a soft penalty after tangling with Pogba and Fernandes stepped up to fire in the spot-kick.

And the home side survived a late Villa onslaught as Ole Gunnar Solsjkaer’s side kick-off 2021 in perfect fashion to go joint top with Liverpool.