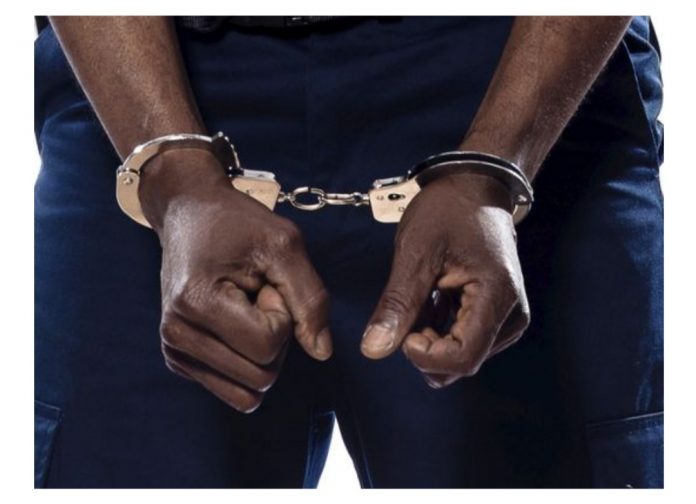 Some galamsey operatives arrested for engaging in illegal mining in the Atewa Forest went berserk on Monday, May 24, 2021, at the premises of Koforidua Circuit Court’ B’ after the court refused them bail.

The prosecution led by Dickson Donkor and Helen Samlafo both state Attorneys, and Silvester Asare – Police Prosecutor prayed the court to remand the accused persons into Police Custody to enable further investigation into some names of individuals mentioned by the accused persons as those who allegedly sent them.

But the lawyers for the accused persons, however, prayed to the court that their clients will not run away and that they will be available anytime the court needs them, therefore, be considered to grant them bail.

The court presided by Her Honour Mercy Addei Kotei, however, remanded the accused into Police Custody to reappear on June 8, 2021.

This is the second time the accused persons have been refused bail by the Court.

Some of the accused persons seated in handcuffs in a bus, went berserk accusing the ruling New Patriotic Party of using and dumping them.

Some of them alleged that the party used them to commit atrocities in Ayawaso West Wuagon by-election as well as the 2020 Presidential election in Kumasi.

“You sent us to Ayawaso, in the 2020 elections you sent us to Kumasi to make a show. But today you are calling us thieves meanwhile it is the office of the President that sent us to the Atewa Forest. NPP is not a good party. We will show them.”

They have been charged provisionally with possession of firearms without lawful excuse.

Brief facts
The brief facts of the case are that the accused persons are a group of persons who carried themselves as operatives of the National Security.

According to the Prosecution, the security agencies picked up information that the accused persons armed with weapons and riffles were undertaking illegal mining activities in the name of the National Security and harassing the natives of villages around the Eastern Region with their weapons.

The Prosecutor said, upon the strength of the information, a team of officers both plain clothes and uniform officers from the National Security secretariat were dispatched to the area to ascertain the facts.

He told the court that, the officers together with a team of police officers from the Eastern Regional Police command proceeded to the Akenteng portion of the Atewa forest reserve, near Osinease in the Eastern Region where the team met and rescued the accused persons from an angry youth at Akenteng.

The Prosecution said preliminary investigations revealed that, the accused persons are a group of persons who carried themselves as National Security Operatives whereas in fact, they are not.

The Prosecution said, the accused persons armed with weapons and parading themselves as National Security Operatives have been visiting several mining towns and villages within the Ashanti and the Eastern Region to undertake illegal mining activities.

It was also established that the accused persons as part of their unlawful activities threatened, demanded and seized an unspecified kilo of gold and huge sums of money from certain small scale miners (Galamsey) in the name of the National Security.

He said, on May 4, the accused persons armed with rifles stormed the Akenteng forest reserve in the Eastern Region as officers of the National Security in furtherance of their identity and mission pounced on them in the forest whilst digging for gold and arrested them.

The accused persons according to the prosecution, were later brought to Accra for further interrogations.

The Prosecution said, in the course of interrogation, the accused persons indicated that they were not officers of the National Security as they alleged.

They however claimed ownership of the weapons retrieved.
According to the prosecution, the accused persons added that they were in the forest to undertake reconnaissance.

Exhibits retrieved from the accused persons include a Tudor short gun, pump-action gun, two bad short guns, assault rifles and 10 rounds of ammunition as well as a cougar pistol.