Buckingham Palace ‘was left incredulous’ when Meghan Markle said she was on her way to Balmoral.

Prince Harry and the Duchess of Sussex prompted an unprecedented flurry behind the scenes at the Palace.

These events were taking place against a backdrop of unimaginable bitterness after years of controversy.

Her Majesty the Queen died at Balmoral on Thursday aged 96, after 70 years of serving her country.

King Charles III ‘told’ Prince Harry not to bring Meghan Markle to Balmoral Castle to see the dying Queen, amid family ‘incredulity’ towards the Sussexes’ behaviour and fears about Harry’s upcoming ‘tell-all’ memoir, it has been reported.

Amid the personal family tragedy on Thursday, a small domestic drama was playing out. Unsurprisingly, it involved the Duke and Duchess of Sussex.

It was a fortunate coincidence of sorts that Harry and Meghan were in the country when the prince’s grandmother passed away, sparing him an emotional and undoubtedly traumatic transatlantic dash as the Queen’s health failed.

Despite the rancour of the past few years, no one would begrudge him the chance to mourn his beloved ‘Granny’, with whom he had always enjoyed a warm and fun-loving relationship.

But as the royal households were consumed in concern for the ailing monarch, the Sussexes prompted an unprecedented flurry behind the scenes by announcing that Harry and Meghan would both be travelling to Balmoral.

According to The Sun, Prince Harry was at Frogmore Cottage when he received a call from his father asking him not to bring Meghan.

‘Charles told Harry that it wasn’t right or appropriate for Meghan to be in Balmoral at such a deeply sad time,’ a source told the newspaper.

‘It was pointed out to him that Kate was not going and that the numbers really should be limited to the very closest family.

‘Charles made it very, very clear Meghan would not be welcome.’

Meanwhile The Telegraph reported that Harry was not initially summoned when senior royals made their way up to Balmoral, like his brother Prince William was, due to constitutional reasons.

A royal insider also said that ‘it’s quite hard to spend too much time with someone you know is about to publish a tell-all book about you.’

Another added: ‘I think the general reaction to Harry and Meghan’s behaviour has been one of incredulity to be honest.’

Despite the rancour of the past few years, no one would begrudge Prince Harry the chance to mourn his beloved ‘Granny’, with whom he had always enjoyed a warm and fun-loving relationship.

Some say that Harry and Meghan hadn’t considered that William’s wife wouldn’t be there, with Kate staying in London instead, and when it was pointed out that she wouldn’t be, they realised how bad it looked.

Others believe Meghan was effectively banned, using the argument that Kate – now the Princess of Wales – was staying at home.

News of their plans came via the small group of media the Sussexes deem it appropriate to deal with and tweeted out by journalists at 1.53pm.

The statement read: ‘From a spokesperson: The Duke and Duchess of Sussex will be travelling to Scotland.’

This was, of course, news to the Palace and it did not go down well. Many behind royal walls, frankly, were incredulous.

There was half an hour on Thursday following the Sussexes’ initial announcement during which matters quickly came to a head.

It is still unclear how much pressure was brought to bear by the Palace itself – or whether senior royal were involved – but a spokesman for the couple frantically began to ‘clarify’ their position, informing those same journalists that ‘only the duke was travelling at the moment’.

Exactly what happened is open to speculation.

Either way, their hurried announcement that only Harry would be making the trip north from the capital prompted a sigh of relief among aides.

Putting aside the anguish of the past few years, the initial decision in itself, that both Sussexes would travel, was seen as wholly inappropriate, according to palace insiders, for one very simple reason: this was a private, family moment.

Only the two oldest children of the elderly monarch – Charles and Anne – were present when the Queen passed away.

Her other children, Andrew and Edward, arrived as soon as they could afterwards on a plane with Prince William, who is now first in line to the throne.

Edward was accompanied by his wife, Sophie, but she is adored by the Queen, who views her as a second daughter, and is likely to have been there at her request.

Although most have assumed that Kate stayed behind because it was her children’s first day at school, which is in part true, she instinctively knew this was an occasion for the Queen’s blood family.

It is impossible to forget that events are taking place against a backdrop of unimaginable bitterness. So deep is the rift between the two brothers that even though Harry and William have been temporarily living just a few minutes’ walk from each other at Windsor this week, there has been no attempt at contact from either party.

Relations are little better with any other members of the family either – King Charles, in particular, has been left bewildered and deeply hurt by his younger son’s incessant attacks.

While no one wants an all-out war, few are in a hurry to forgive or forget Meghan’s series of laser-guided and deeply harmful accusations against family members, as well as the institution of the monarchy itself.

It was noticeable that there was no invitation for Harry to join the family party that headed north on Thursday, taking off from RAF Northolt bound for Aberdeen. 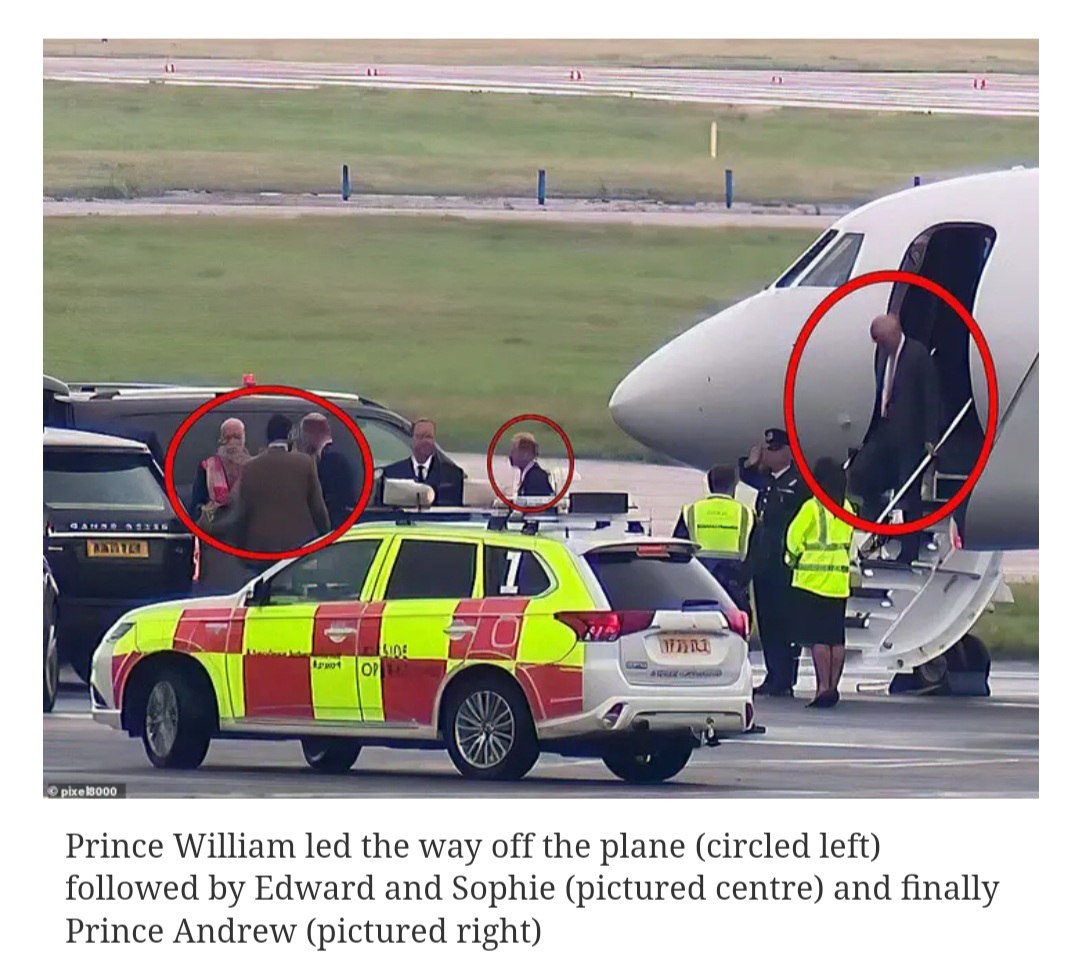 Prince Harry made his own way to Balmoral by private jet and faced a lonely drive to the castle, finally arriving at 7.52pm – an hour and a half after the palace’s historic statement informing the nation of the death of Her Majesty the Queen.

During that time he would have had to kiss his father’s hand, curtesy to his step-mother – and break bread with those he has caused so much hurt. 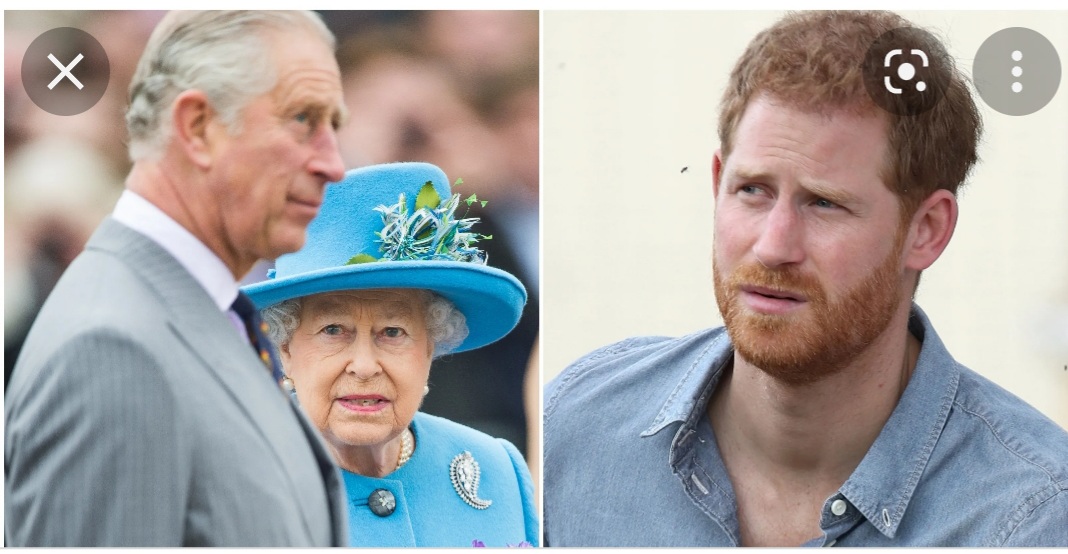 The brothers now face seeing a lot of each other as they prepare for the Queen’s funeral.

Harry made his way separately back to Windsor on Friday and there was no word last night as to whether the pair have any plans to meet – although it seems Harry will remain at Frogmore Cottage until after the funeral on September 19.

It is unclear whether Meghan is still in the country, but she has two young children back in the US and may well fly back to them, returning for the funeral.

Grief is often said to bring a family together – whether it does when it comes to Harry and the rest of the Windsor dynasty remains to be seen.

Meghan Markle has canceled several planned appearances in New York that had been set for the day after Queen Elizabeth’s likely funeral date, as the Royal Family enters the official morning for the late monarch.

The Duchess of Sussex had been scheduled to appear on The Tonight Show with Jimmy Fallon on September 20, the same day she and Prince Harry planned to visit the UN General Assembly in Manhattan.

Both appearances have now been nixed, and Markle plans to delay releasing the next episode of her podcast Archetypes, which had been set for release next Tuesday on Spotify, sources told Page Six on Friday. 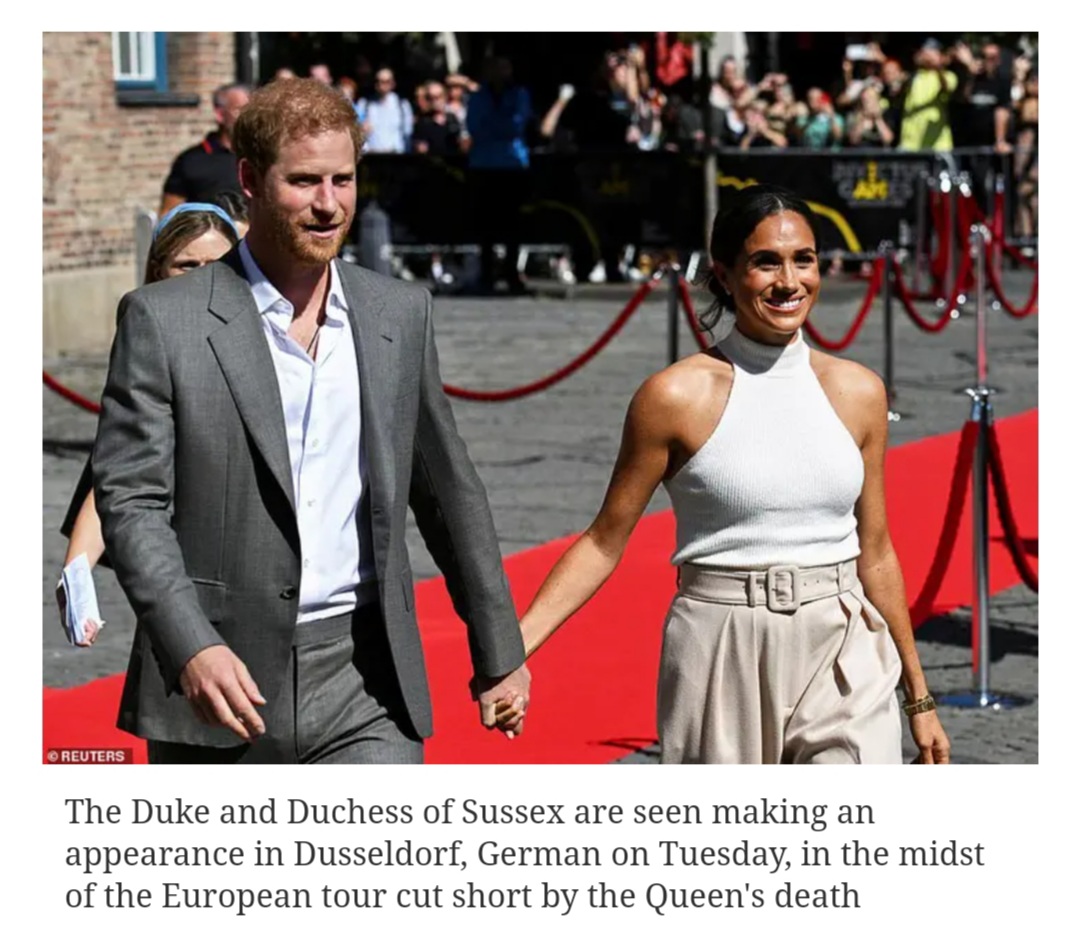 By happenstance, the Queen’s death on Thursday, September 8, 2022 came as the Duke and Duchess of Sussex were in the midst of a European tour on a public relations blitz.

Markle had been scheduled to appear on The Tonight Show with Jimmy Fallon on September 20, which would be one day after the Queen’s funeral, but has pulled out.

Now, their plans have understandably been put on hold as they mourn, leading up to and following the Queen’s state funeral.

The funeral is expected to be scheduled for September 19 at Westminster Abbey in London, but the official date has not yet been announced.

It’s unclear whether Markle has already booked another date to appear on The Tonight Show.

‘I don’t even know what she was going to talk about (with Fallon), but that’s obviously canceled now,’ one source told Page Six.

A spokeswoman for the NBC program did not immediately respond to a request for comment from DailyMail.com.

The Duke and Duchess of Sussex were together in Frogmore Cottage in Windsor when the Queen’s failing health became apparent, but Prince Harry flew alone to Scotland, where she (Queen Elizabeth II) was staying at Balmoral.

Understandably, all members of the Royal Family have suspended and altered any plans for public appearances as the UK enters a highly choreographed, weeks-long morning period.

In his first public address as the country’s new monarch, King Charles III gave the order that a period of ‘Royal Mourning’ for the Queen will be observed from now until seven days after her funeral. 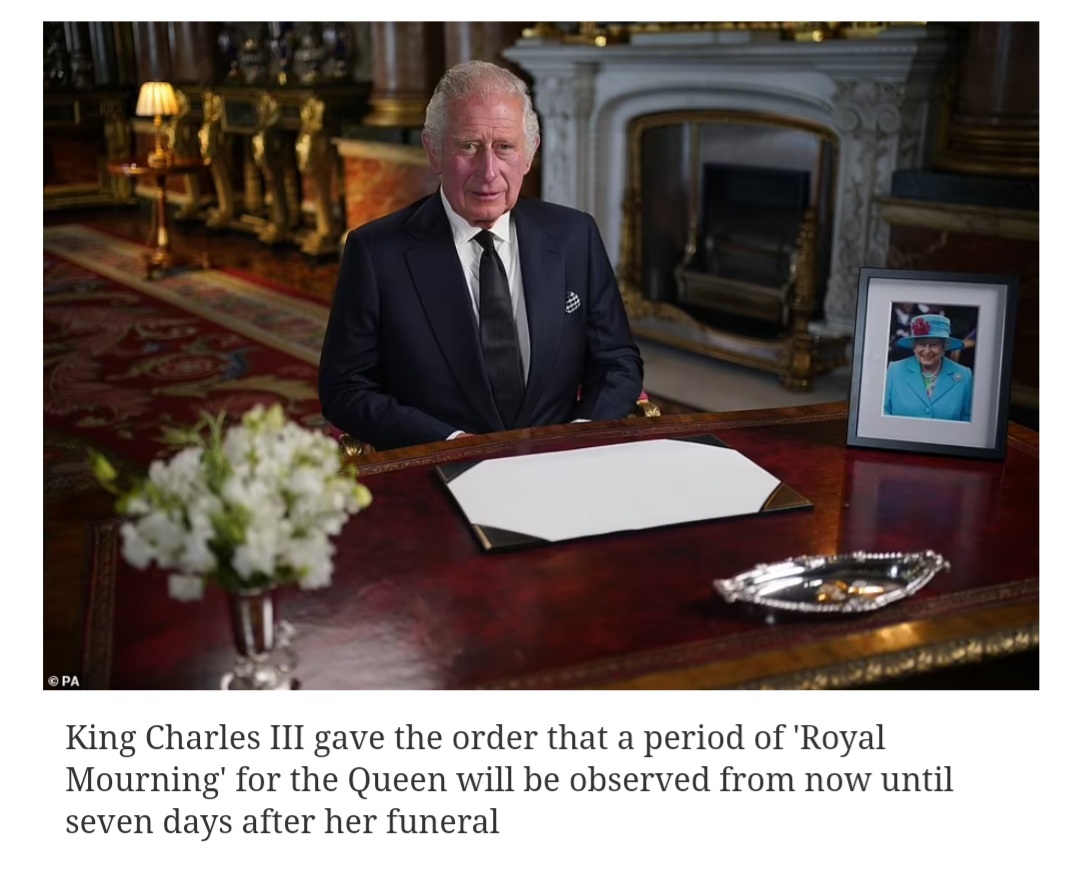 Royal Mourning will be observed by members of the royal family, royal household staff and representatives of the royal Household on official duties, together with troops committed to ceremonial duties.

According to reliable sources, Prince Harry will not wear military uniform for a vigil for the Queen at Westminster Hall it is understood, in what has been described as a “huge blow” for the Duke of Sussex 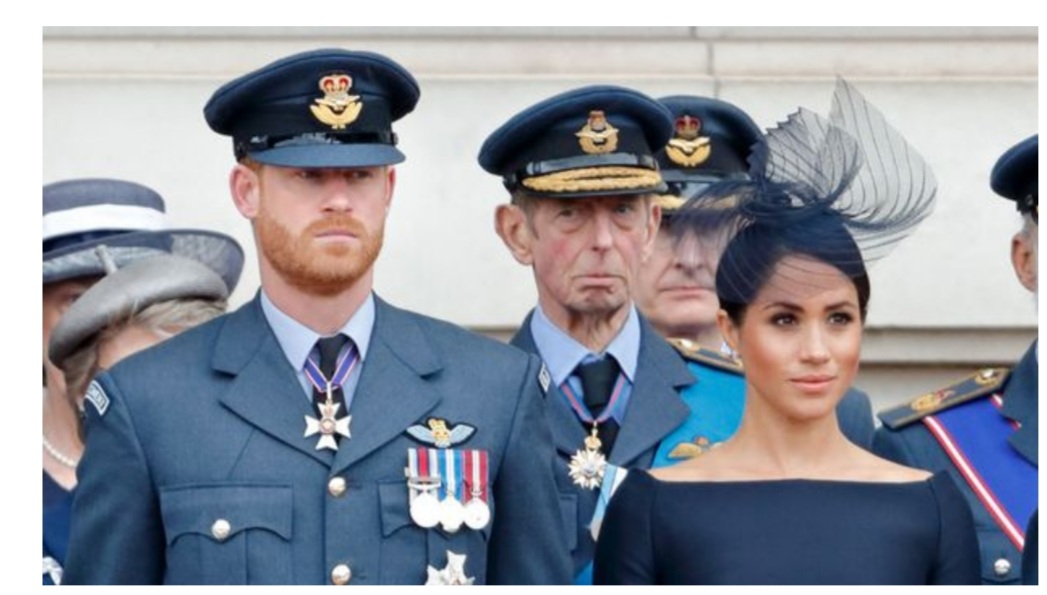 Prince Harry will not be allowed to wear military uniform for a vigil to the Queen at Westminster Hall, it is understood.

Omid Scobie, a biographer who wrote a book on Harry and wife Meghan Markle, tweeted: “I understand that, unlike Prince Andrew, Prince Harry will NOT be allowed to wear uniform at the final vigil in Westminster Hall. No doubt a huge blow for the Duke of Sussex, who served for 10 years and this morning spoke of the Queen being his “commander-in-chief”.

On Friday, September 9, royal salutes were fired with one round for every year of the Queen’s life at 1pm in Hyde Park by the King’s Troop Royal Horse Artillery.

The Queen’s casket will soon be taken to the Palace of Holyroodhouse in Edinburgh, Scotland.

It will then be solemnly processed to St. Giles Cathedral to lie at rest for 24 hours, with a public viewing.

The casket will be flown to London and will lie in state at Westminster Hall for four days, before the state funeral, most likely on September 19.