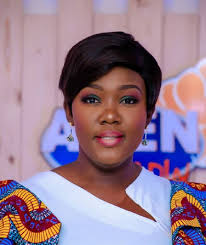 Over the weekend on the Delay Show, Cynthia Tima Yeboah, popularly known as Tima KumKum shared an inspiration story about her life, her marriage and her divorce as well her regrets and cheerful moments in life. She is an actor and a presenter with over 20 movies.

She was who was introduced into the movie industry by Prince Minkah. Her breakthrough movie was “Asem asa”.
On completion of her studies, Tima joined to Multimedia for her National service in her early 20s.

Odd: Guy Proposes And Kisses Another Mans Girlfriend While He Makes A Call

She met her husband at IBMNJ where they dated for about four years and got married in a white wedding and customary ceremony at Cape Coast, the Central region of Ghana.

She also revealed that her reason for marrying was to spite her ex-boyfriend who had slept with a friend of her. The host then iterated that, “was it a revengeful marriage”? Tima responded that she wasn’t in love with her then husband but was hopeful she’d grow to love her.

After marriage came their first baby preceded with a new opening for her in multimedia group. She was fully employed in February 2014 by the Multimedia group.

They lived together for quiet sometime after which separation started. Things did not go well, so before we even got our second baby, they had separated.

After their second child, Tima said that she wanted to give him a second chance but she realized it wasn’t going work between them, hence divorce in 2017.

When she started Kumkum Bagya, I was in the divorce process. After divorce, she had no knowledge the whereabouts of her ex-husband and so the kids do not remember him because he doesn’t look for them, Tima said.

”I am content but not happy because I need a man in my life”-Tima. She said she balances work with taking care of her lovely kids. She also has a house help who assists her.

Life has diverse twists and turns but in all, the constant thing is “Life goes on”.