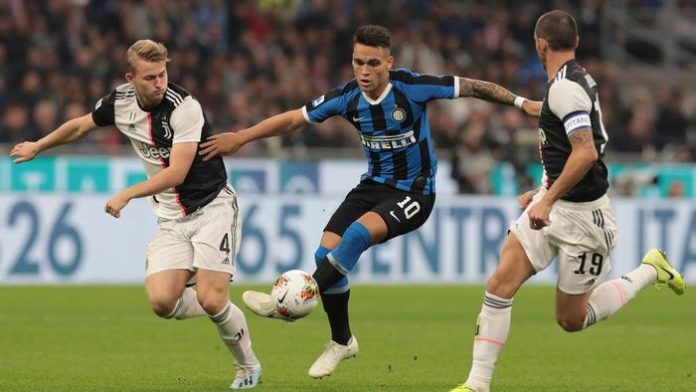 Vidal and Barella dent Pirlo;s title defence in derby win by securing a 2-0 victory at San Siro on Sunday.

The Bianconeri were unable to make the most of those reprieves as an emphatic finish at the end of a route-one move saw Nicole Barella double Inter’s advantage.

Ronaldo hopes to continue playing for ‘many years’

This was Antonio Conte first Serie A win against Juve- the club he led  in 2011, where he implemented a 3–5–2 formation and won three consecutive Serie A titles, which became the start of their ongoing run of dominance.

Inter is now in level with Milan who play their game in hand against Cagliari on Monday.

The five time Ballon d’Or winner had a goal ruled out for offside, a minute later was Vidal’s opener as he nod Barella’s delivery into the left corner.

Inter’s lead should have been doubled by Martinez in the 23rd minute when blazed over with the goal gaping after Szczesny parried Lukaku’s shot straight to him. Martinez failed to hit the target again when he had the opening

In the 53rd minute, Barella gave Inter a second goal when he fired Bastoni’s ambitious pass into the roof of the net.