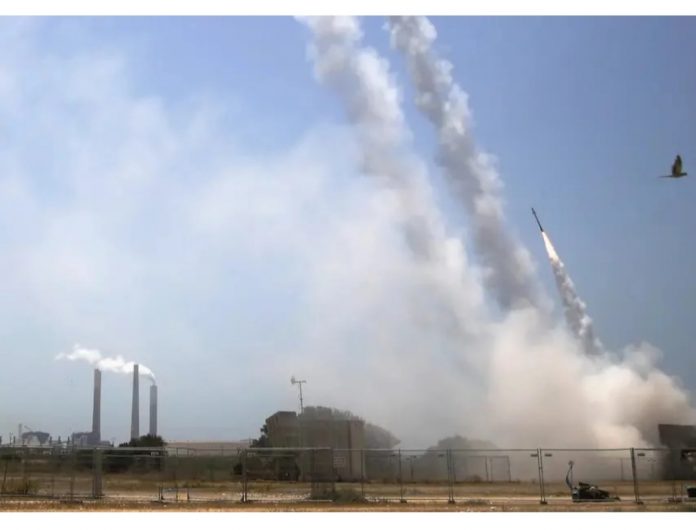 Egyptian security officials are reportedly in the region trying to broker a truce.

The Israeli military said Thursday that it had deployed air and ground troops within the Gaza Strip to battle the Hamas terrorist group, which has been launching rocket barrages since Monday.

Israel had been retaliating with air strikes, but the ground attack marks another major escalation in what authorities were already describing as the largest clash between Israelis and Palestinian militants since 2014.

And at least three additional rockets were launched by unknown persons out of Lebanon, the country to the north, according to the Israeli Defense Forces.

Israel has taken cedit for killing more than a dozen Hamas military figures and razed a pair of high-rise towers in airstrikes amid the country’s fierce military offensive in the Gaza Strip.

1. Secretary of State Antony Blinken and the Biden administration, as well as other world leaders, have called for deescalation.

2. The IDF said at least three rockets were shot at Israel from Lebanon, where the Iran-backed Hezbollah militants operate as well as some Palestinian militants.

3. Israel said it had killed more than a dozen senior Hamas leaders.

4. Civilian mobs consisting of Muslims and Jews have also clashed and rioted in several cities.

As a result, the State Department is discouraging Americans form traveling to the region due to the heavy fighting.

This latest conflict began on May 6, 2021. Protests by Palestinians began in Jerusalem over a planned decision by the Supreme Court of Israel regarding the eviction of Palestinian residents in Sheikh Jarrah, a neighbourhood of East Jerusalem.

The protests quickly escalated into violent confrontations between Jewish and Palestinian protesters.

Things took a dramatic turn on Monday, when Hamas and another Islamist group, Palestine Islamic Jihad, sent massive salvos of rockets into Israel, firing them toward Jerusalem, with claims of defending the holy mosque and Palestinians there against Israeli aggression; the first rocket attacks on Jerusalem since 2014.