In less than a week after Rosemond Brown was released from her 90 days jail term, she has managed to land herself in fresh trouble.

In an Instagram video, the actress addressed issues about some fundraising people started for her and her family when she was arrested.

According to Polo in the video sighted by newstodaygh.com, she was on her rounds doing her Honey deliveries when she received a call from a woman called Mama Alice.

She said Mama Alice was so furious with Akuapem Polo for not showing appreciation for the donation she and others made to her.

Akuapem Polo who was so hurt by what the woman told her on phone, said she called DKB severally and the latter did not pick up her calls neither did he return the call.

Rosemond Brown added that apart from those_called_celebs on Instagram she has not received any monies from any other person concerning fundraising in her name.

In the video, Akuapem Polo mentioned to DKB directly that she has not received any money from her.

This video was the basis for which DKB is dragging Polo to the police.

DKB in a Facebook post released the statement he filed yesterday and wrote about doing good to people. 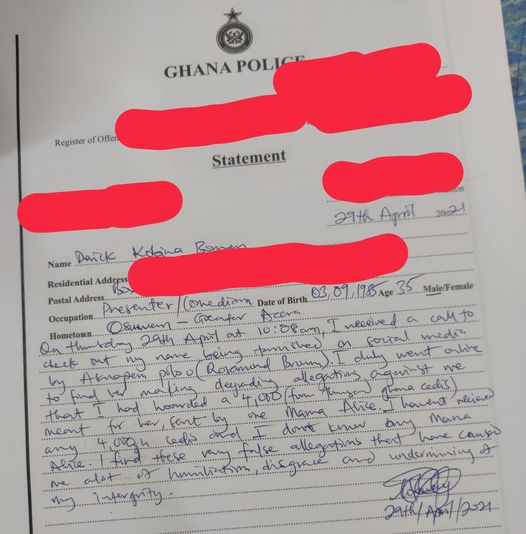 You can either be ungrateful or a defamer but you decided to be the 2.

I swear on every sweat, blood, and insults I’ve received, the extent to which I went to support is the same extent I’ll go to drag you over this”.

His comments sparked mixed reactions from his fans and Ghanaians.