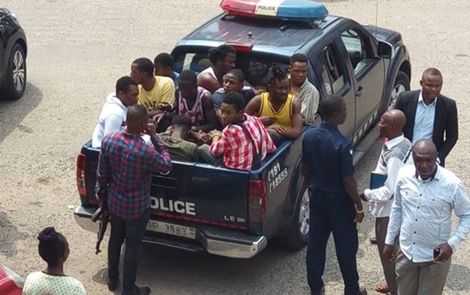 Nine (9) persons suspected to be inmates from a Nigerian prison who broke jail recently have been arrested in Ghana at Ada Foah.

The Ada District Police Command have confirmed the arrest of the nine (9) persons including a female. They also confirmed receiving information that the Nigerians believed to be fugitive jail breakers were ferried across the Volta river into Ada Foah and were preparing to set off for Accra.

The police then proceeded to the town at the Clinic Junction lorry station, and intercepted them in a Sprinter bus with registration number ER 1657-14 headed towards Accra.

The suspects have been identified as follows:

According to news reports, these fugitives are suspected to be members of the about 1,800 inmates who broke jail in the Owerri State in Nigeria two weeks ago and currently on the run.