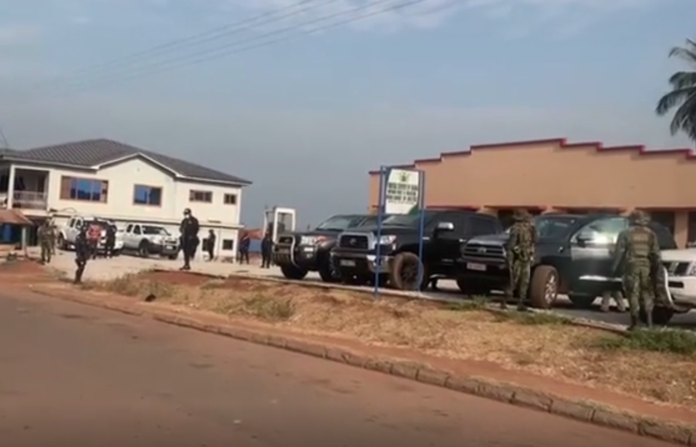 There was a heavy security presence at the Wenchi High Court during the ruling on the Sene West parliamentary election results.

Military and Police persons patrolled the courtyard in their numbers to ensure calm and order.

The court gave Thursday, December 17, to give its ruling on the election following a petition brought before it by the New Patriotic Party (NPP) parliamentary candidate in the just-ended elections.

The petitioners were asking that the court grants them a favor that the NPP candidate for Sene West, Joseph Markay Kumah was genuinely elected and be declared as the winner of the parliamentary race.

Lawyers for the NPP’s Sene West candidate, Joseph Markay Kuma, earlier pull back their motion of injunction on the declaration of the results as filed in their petition.

The court awarded a cost of GH¢6,000.00 against the petitioners for withdrawing their application for the interlocutory injunction.

For now, the NPP  has 137 parliamentary seats while the NDC has 136 with one independent candidate and Sene West being outstanding.