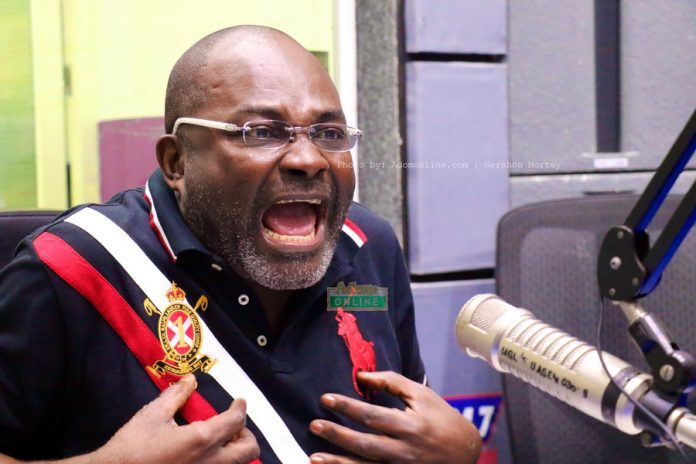 The ruling New Patriotic Party (NPP) Member of Parliament for Assin Central, Ken Agyapong, has descended heavily on Ministers of State who served in President Nana Akufo-Addo’s first term. He described them as poor managers.

The firebrand lawmaker made the comment in response to calls by some NPP members on President Akufo-Addo not to appoint any of the 19 Deputy Ministers who were MPs and lost their seats into his next government as he begins his second term.

But in an interview on a show dubbed ‘Seni ti nie’ aired on Adom TV, the eccentric politician jumped to the defence of the Deputy Ministers and urged the President to look beyond their defeat and appoint the competent ones into his government.

According to him, most of the ministers didn’t give opportunities to their deputies to function efficiently which caused some of them their seats in the December 7, 2020, parliamentary election.

“Some of the former Deputy Ministers are very competent. They lost their seats due to certain difficulties. Why should such appointees not get ministerial appointment in Akufo-Addo’s next government? The truth is that a lot of the Ministers’ managerial skills are very poor.

We lost 19 Deputy Ministers, if you go to their offices they are there as Deputy Ministers but not even common paper passes through their desk for onward action. Meanwhile, that Deputy has a constituency just as his or her boss, the substantive Minister,” he said.

“I always advise those going in for deputy ministerial positions not to accept that offer and rather concentrate on being MPs because the moment your constituents know that you’re a Deputy Minister they expect so much from you meanwhile their bosses don’t give them opportunities to function well.

The Ministers deal directly with the Chief Directors and I don’t fear to tell this truth to the face of the ministers. I cannot sit here knowing the truth for me to keep quiet and rather put the blame on Deputy Ministers. Majority of them were not given opportunities,” he added.