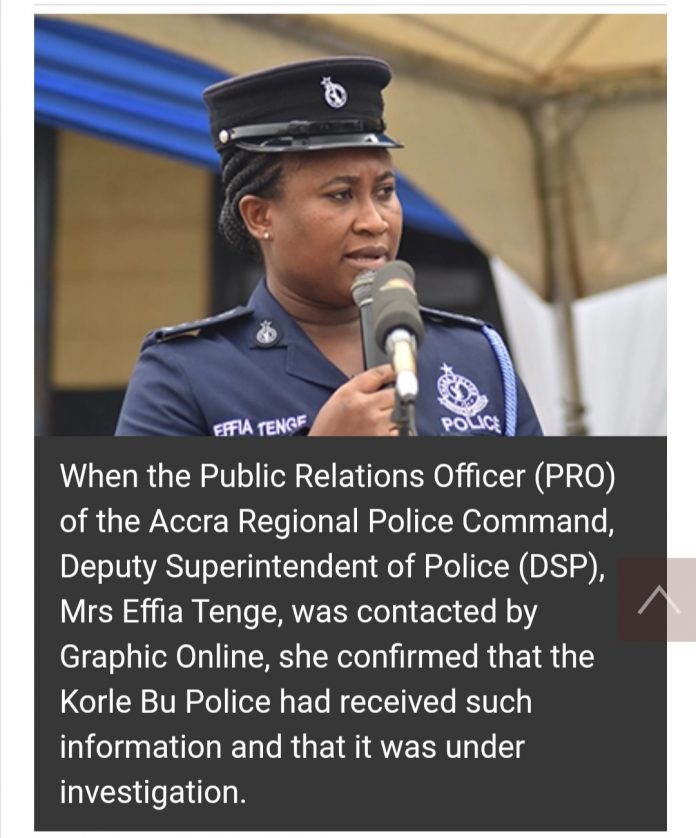 The Korle Bu Police are investigating a case involving the contamination of a medical doctor’s drinking water with HIV-infected blood.

The act is suspected to have been carried out by another doctor following a disagreement between the two.

Both doctors (names withheld) work at the Department of Obstetrics and Gynaecology at the Korle Bu Teaching Hospital (KBTH).

Checks by Graphic Online at the Korle Bu District Police Command indicated that at about 11.30a.m. on May 6, 2021, a medical doctor, accompanied by the lawyer of the Korle Bu Teaching Hospital (KBTH), Mr Kwame Gyamfi, filed a complaint at the charge office of the police station regarding an attempt to poison the doctor’s drinking water.

The medical doctor told the police that he was on a 24-hour duty with six other doctors at the Labour Ward One of the hospital.

At the end of the 24-hour shift, the medical doctor allegedly returned to his consulting room and detected that his drinking water which he kept in a water bottle in the room was contaminated.

The doctor suspected that his water had been contaminated after he found a reddish substance which appeared like blood in the water.

Based on the doctor’s suspicion, the water in the bottle was clinically tested and it was found that the substance was blood.

When the blood was later tested, it came out positive for HIV.

The medical doctor told the police that he suspected one of his colleagues and gave his name to the police.

He claimed that the two of them had some disagreement while they were on duty at the labour ward.

When the Public Relations Officer (PRO) of the Accra Regional Police Command, Deputy Superintendent of Police (DSP), Mrs Effia Tenge, was contacted by Graphic Online, she confirmed that the Korle Bu Police had received such information and that it was under investigation.