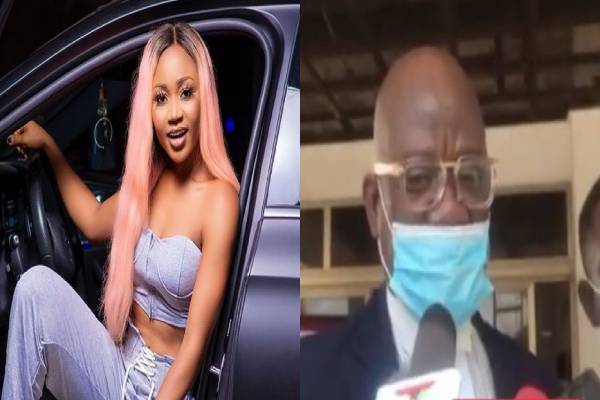 Counsel for Rosemond Alade Brown, aka, Akuapem Poloo says his client will appeal against the 90 days sentence by an Accra Circuit Court on Friday.

Speaking to journalists in Accra after court proceedings, Mr. Andrew K. Vortia described the sentence as “harsh,” arguing that, his client was a first-time offender.

According to Mr Vortia, he was “disappointed” at the judgement though the trial judge had the discretion.

He said the court should have considered the mitigating factors that he had advanced; including the fact that Brown was a first time offender and a single mother.

Mr Vortia said as soon as he receives the proceedings, he would move to file the appeal. He was optimistic that he would get a certified true copy of the lower court’s proceedings by Monday to enable him to file an appeal. On Friday, April 16, this year, an Accra Circuit Court, sentenced Brown to 90 days imprisonment for splashing her nude pictures and that of her son on Instagram.

The Court sentenced Rosemond to 90 days each on all three counts of charges, the sentences are to run concurrently. Brown was brought to court on charges of publication of obscene materials, engaging in domestic violence namely, a conduct that in any way undermines another person’s privacy or integrity.

The court presided over by Mrs Christina Cann, in delivering the sentence, noted that apart from cankers such as rape and defilement, the act of posting obscene pictures was becoming rampant in the country. She said it was time the society upheld societal morals and the court should take a lead in that direction.

The Court said Brown did not respect the right of her son in posting the pictures and said it would hand down a sentence that would deter other like-minded persons.

The Court commended Child Rights International, a child-focused organisation, for bringing such action before the court and urged it to continue to take similar actions to protect other children from all forms abuses and violence. Earlier, Mr Andrew K Vortia, defence counsel, prayed the Court to consider the plea of the convict and for not wasting the court’s time.

According to the counsel, his client was a first time offender, a single mother and sole bread winner of her family. Mr Vortia held that handing a custodial sentence on Brown would have effect on her and people who depended on her.

He said his client had shown remorse from the beginning of the trial and had also pulled down all articles and materials from the internet. Mr Vortia also said a custodial sentence would affect Brown’s budding career.

The prosecution, led by Chief Inspector Agartha Asantewaa, drew the Court’s attention to the fact that the accused was a first time offender and a single mother.

The facts as narrated by the prosecution, led by Chief Inspector Agartha Asantewaa, earlier, were that the complainant, Mr Bright K. Appiah, was the Director of Child Rights International Ghana. It said on June 30 last year, the prosecution said Brown celebrated her son’s seventh birthday and took nude pictures with her son, who was also half naked, and posted same on her Instagram page, which went viral on social media.

The prosecution said the pictures attracted comments, adding that the behaviour of the accused person undermined the dignity of her seven-year-old son, among others. It said the complainant petitioned the Director-General CID and the matter was referred to the Domestic Violence and Victims Support Unit (DOVVSU).

The prosecution said Brown, was arrested and in her cautioned statement, admitted posting the nude picture with her son unintentionally.

A write up accompanying the picture read: “I am naked in front of you because this is how naked I was, giving birth to you, so in case you find me lying somewhere don’t pass by but see me as your mom who brought you to life.”The prosecution held that Brown deliberately posted the pictures.