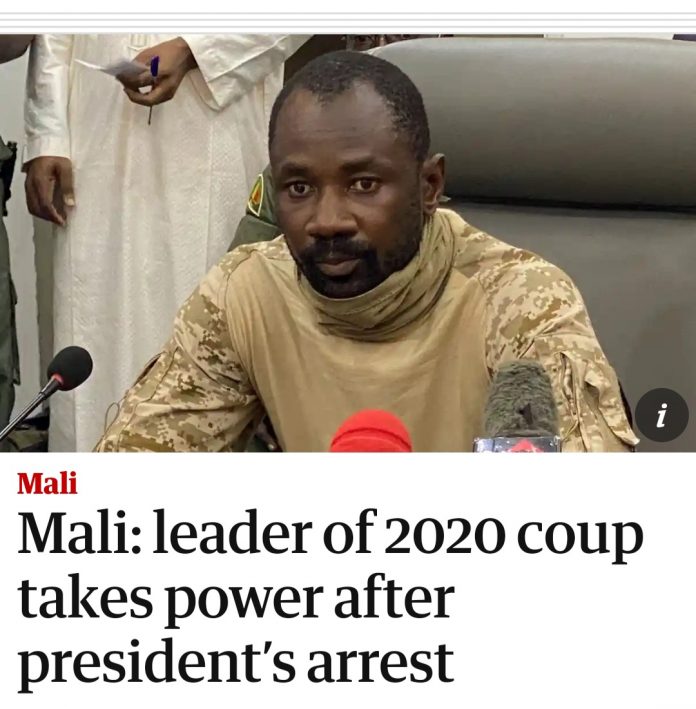 Mali’s interim vice-president, Col Assimi Goïta, who led a military coup last year, has declared he has seized power from the transitional president and prime minister, after they failed to consult him about the formation of a new government.

In a statement broadcast on state television, Goïta said Mali’s civilian president, Bah Ndaw, and prime minister, Moctar Ouane, had been placed “outside of their prerogatives”, and that he orchestrated their arrests and removal to the Kati military base, outside of the capital, Bamako.

European Union leaders, the African Union and the US condemned the “kidnapping” of Mali’s civilian leaders on Monday night, and warned of potential sanctions against those responsible.

In the statement read through an aide in response to the outrage, Goïta defended the actions of the military.

“The vice-president of the transition saw himself obligated to act to preserve the transitional charter and defend the republic,” the statement said.

He condemned a cabinet reshuffle on Monday in which two influential cabinet ministers appointed from the military were removed, branding it “demonstrable intent to sabotage the transition”.

Elections would be held next year, in accordance with the transition agreement, made following the Goïta-led coup last August.

Yet diplomatic outrage that erupted after the arrests continued following the broadcast.

The German chancellor, Angela Merkel, and French president, Emmanuel Macron, led condemnation of the events at an EU summit on Tuesday and demanded that the leaders be released.

Macron branded it an “unacceptable coup d’etat” and warned “we are ready in the coming hours to take targeted sanctions”.

Tensions between civilian government officials and the army have been constant since a coup in August overthrew the then president, Ibrahim Boubacar Keïta. Ndaw and Ouane had been tasked with overseeing an 18-month transition back to civilian rule.

Civil society organisations have been warning that the transitional government must be able to act independently of the military, before elections in 2022.

In Monday’s reshuffle the military kept the strategic portfolios it controlled during the previous administration, but two coup leaders – ex-defence minister Sadio Camara and ex-security minister Modibo Kone – were replaced.

On Twitter, the UN mission in Mali, known as Minusma, said:

“We call for calm and demand the immediate and unconditional release of the president and prime minister.

Those who are holding them will be held accountable. They must ensure the wellbeing of those detained.”

The US embassy in Bamako, meanwhile, said it had received “reports of increased military activity in Bamako”. It urged Americans in Bamako to limit their movements.

The developments are likely to exacerbate instability in the Mali, where violent Islamist groups linked to al-Qaida and Islamic State control large areas of the desert north.

Political corruption and instability has fuelled insecurity in the impoverished country for almost a decade.

Prior to Monday’s developments, Kati’s military base had twice imposed its will by ending the rule of Malian leaders. In August last year, the military took Keïta to Kati and forced him to resign after mass anti-government protests.

A mutiny there also helped topple his predecessor, Amadou Toumani Touré, in 2012.

Resentment at the role of France, the former colonial ruler, in Mali’s affairs has also fuelled political upheaval.

Mali has been in turmoil ever since. Touré’s departure triggered an ethnic Tuareg rebellion to seize the northern two-thirds of the country, which was hijacked by al-Qaida-linked jihadists.

French forces helped beat back the insurgents in 2013 but they have since regrouped and mount regular attacks on the army and civilians.

They have exported their methods to neighbouring Burkina Faso and Niger, where attacks have skyrocketed since 2017.

Last month, the transitional government said it would hold legislative and presidential elections in February 2022 to restore a democratic government, yet many opposition figures and experts have warned that the military could move to impose its will and shape the outcome.

Andrew Lebovich, a policy fellow at the European Council on Foreign Relations, said that failings of the international community had also played a role in Mali’s crisis.

“The international community, and particularly the EU, EU member states, and Ecowas [Economic Community of West African States], contributed to this instability by allowing the junta to maintain a predominant role in Mali’s transition,” he said.

“The arrests of President Bah NDaw and Prime Minister Moctar Ouane demonstrate the continued stranglehold of the former junta on Mali’s transitional administration, and the failures so far to curtail this influence.”