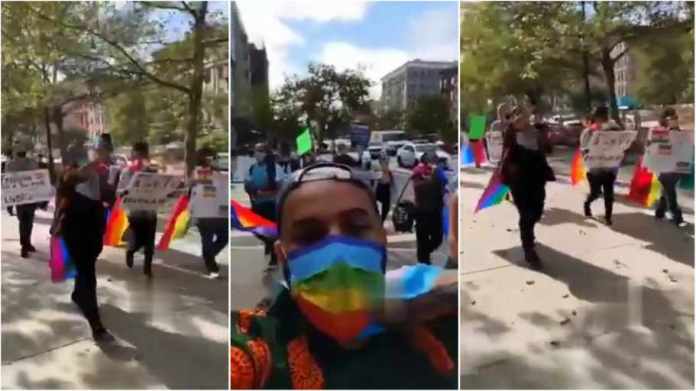 There have been mass protests in New York and Canada over Ghana’s Anti-Gay Bill which on Monday, October 11, 2021, was presented to parliament.

Rallies were organized in Harlem, New York, California, and in Oakland to get the international communities to get Ghana to accept Gay rights.

The group which thinks the bill presented to parliament is too harsh.

With the campaign trending with social media hashtags #QueerGhanaianLivesMatter, #KillTheBillGhana, and #Ghanagetsbetter the protesters called on Ghanaians home and abroad to join the call for rejection.

The protestors held various placards, “LGBTQ We Demand Equality in Ghana, Ghana’s Hate Bill Has to Go, Freedom and Justice is a lie’, the demonstrators clearly projected their message across to stop the bill from being passed into law.

“It would impede HIV and other health services for LGBTQI+ people. The bill would also require suspected LGBTQI+ people to recant their s.ɛ.xual and gender identities and pay for conversion therapy to avoid prison time,” the protesters said.

Their Cry was for the LGBTQI+ community whom they believe will be pushed into the shadows and hence increase violence, and so the need to reject the bill.