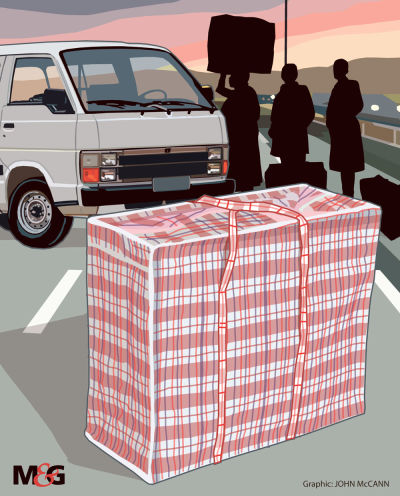 In 1983, Nigeria expelled two million undocumented West African migrants, half of whom were from Ghana.

The sturdy, checked bags into which they packed their belongings have become a symbol of exclusion and intolerance. Nearly four decades later, the region is yet to confront its emotional baggage…

At that time Nigeria was the only English-speaking neighbour, Ghana, was going through quite the opposite.

A deadly mix of famine and insurgency was precipitated by a crash in the price of cocoa (Ghana was the world’s largest cocoa producer in the 1960s) and the 1966 coup, which ousted independence leader Kwame Nkrumah.

At the time, the country’s population hovered around the seven-million mark, but several million people decided to journey east and try their fortunes in prosperous Nigeria.

Recruiters from Nigeria came to Ghana looking for people who would like to teach or take up casual jobs — the jobs Nigerians themselves were unwilling to do.

After some few years Nigeria’s economy was running down the drain. And due to the migration, the government found it hard to share it’s resources amongst citizens.

So the president of Nigeria at that time issued a warning to citizens who had entered into Nigeria through illegal means.

Most of these West Africans were Ghanaians.

It is reported that over 1 million Ghanaians were sacked from the country. It was at this point that the bag GHANA-MUST-GO became famous because it was cheaper to afford at that time prior to the deportation

Crime Samuel Thompson Junior - March 8, 2021 0
The Deputy Director for the National Disaster Management Organisation (NaDMO) in the Nabdam District has been murdered by three unidentified armed men in the...