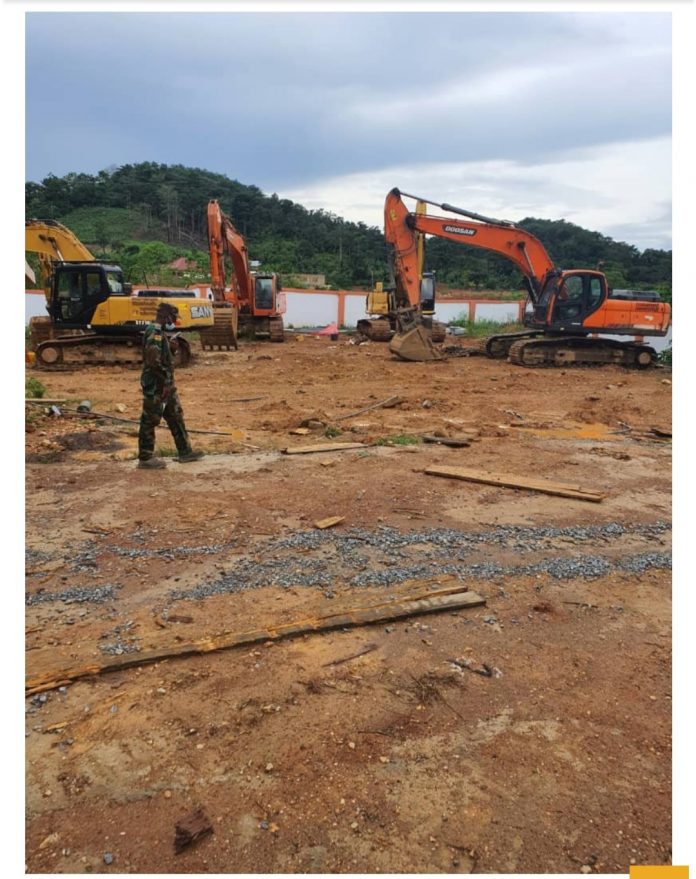 A high powered military delegation led by the Chief of Defence Staff (CDS), Vice Admiral Seth Amoama, has expressed shock at the level of devastation that the activities of illegal small scale miners (galamsey) have visited on River Mempong, one of the major tributaries of River Birim in the Akim Kwabeng Traditional Area.

Also read: How Galamsey is killing our forests and water bodies.

The Birim River is one of the main tributaries of the Pra River in Ghana and the country’s most important diamond-producing area, flowing through most of the width of the Eastern Region.

The river rises in the east of the Atewa Range, flows north through the gap between this range and the Kwahu Plateau, then runs roughly south-west until it joins the Pra.

Asaase News sources familiar with the visit indicated that the Chief of Defence Staff’s delegation, which included the Chief of Army Staff, General Officer Commanding (Southern Command), Commanding Officer of the 64 Infantry Regiment, among others at the end of their tour on 22 May 2021, concluded that, “the devastation is unimaginable.” 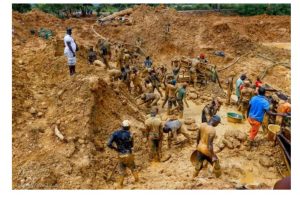 Observations of the delegation

Among others, the delegation identified three things that they say were very clear to them and what ought to be done to address the situation.

1. The delegation observed, “River Mempong, one of the major tributaries of River Birim is completely devastated and reduced to a series of isolated ponds scattered across an area of about 1.2 km square.”

The water channel of River Birim, the delegation says “has been diverted several times through mining activities; leaving in its trail a thin strip of water meandering its way through the landscape and the environmental degradation occasioned by surface mining has completely destroyed the catchment area of this river.”

2. The CDS and his team noticed that there was no sign of reclamation and tree planting activities in the said devastated area to revive the ecological landscape.

3. The team discovered that a large number of excavators and bull dozers of varied sizes had been moved from various mining sites and re-located within the surrounding settlements and villages nearby, either to be moved away or to be redeployed when the tempo of operation HALT II died down.

According to Asaase News sources familiar with the activities of the delegation, some mining equipment destroyed by Operation HALT II were found at some of the galamsey sites they visited and they were concerned about the possible repair of these equipment by their owners to resume their illegal mining activities when Operation HALT II comes to an end.

Some of the illegal mining equipment were spotted lying all over the place like a war zone by the delegation; excavators were also spotted along some river bodies in the Eastern Region.

There has been a public backlash at the decision to burn down excavators discovered by Operation HALT II along river bodies in the country.

Several suggestions have been proferred including calls for the excavators to be seized and given to the military to support their construction activities. 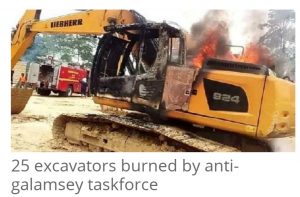 “The state must spend money to seize and retrieve all the excavators from the bush and keep them at a safer place to be used for reclamation,”.

This is what a social commentator wrote on his Facebook wall concerning the burning of illegal mining equipment that Operation HALT II military taskforce comes across in the future.