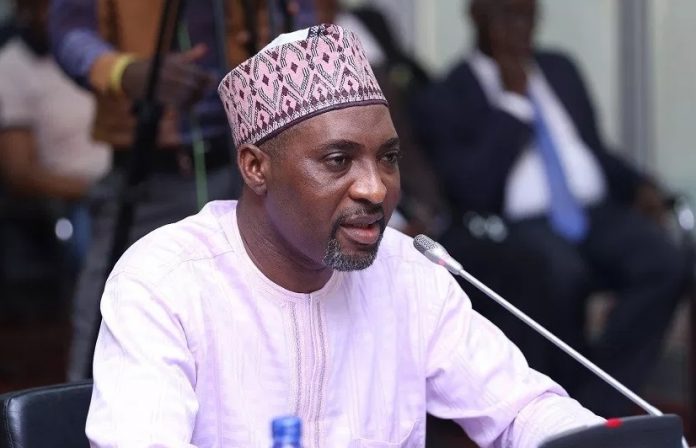 Alhaji Mohammed Mubarak Muntaka, Member of Parliament(MP) for Asawase has revealed the secret behind his athleticism which was put to full display on live television during last Thursday’s exercise to elect a Speaker of Parliament, NewsTodayGh.com reports.

Beautiful Young Lady Falls For Muntaka After His Bravery In Parliam

Narrating the ordeal in parliament that characterized the election of NDC’s Alban Sumana Kingsford  Bagbin as speaker of the house on Thursday, January 7, Hon. Muntaka said he was a sprinter in his days at Tamale Secondary School of which he won laurels for his alma mater hence his swiftness at stopping Hon. Carlos Kingsley Ahenkorah from bolting away with some ballot papers he ‘stole’.

“Kojo, I was a sprinter when I was at TAMASCO that’s why I could easily stop Carlos Ahenkorah from running away with the ballot papers he stole and chewed some.

If you go to school, they will tell you about my exploit.” He revealed in an interview with senior media practitioner, Kojo Marfo on Kumasi-based Abusua FM monitored by MyNewsGh.com

The 49-year-old who prefers to be referred to as the ‘opposition Chief whip’ left Ghanaians in shock when he gave colleague Member of Parliament(MP) for Tema West, Carlos Kingsley Ahenkorah a hot chase as though he was on a relay to retrieve snatched ballots during a voting exercise in parliament to elect speaker of the house.

The NPP MP however explained in a statement that he snatched the ballot papers during the chaotic election to give President Nana Akufo-Addo “peace of mind to run the country.”

“It’s a very tough situation to have opposition as a speaker especially when he’s the president in the absence of Nana Addo and his vice not to mention how parliament would function by passing the president’s policies and laws to pave way for development.”