The Republic of Nigeria was thrown into a state of mourning today as the late Chief of Army Staff (COAS), Lt. Gen. Ibrahim Attahiru and ten other officers were laid to rest at the Military Cemetery in Abuja this afternoon.

The late general and his military entourage who also died in the plane crash were given full burial with military honours as their coffins draped in the national colours were lined up at the cemetery, waiting to be lowered into the ground to signal the end of a lifetime on earth.

The atmosphere was sombre and emotionally charged as the mourners stood there watching with some shaking their heads in shock, amid crying and wailing from family, friends and loved ones who had gathered there to bid the general and his men farewell.

It became even more tensed after the next of kins of the officers were presented with the Nigerian flag in honour of their dead.

According to eyewitness reports, one of the wives who was being led back to her seat after receiving the flag collapsed, as members of the military and other civilians present tried hard to revive her. She was eventually rushed out of the premises in an ambulance.

Another widow also collapsed under the tent during a speech being delivered by the Chief of Defense Staff in the presence of Defense and Police Officers and other invited dignitaries. She was quickly attended to by the medical personnel present.

The National President of DEPOWA, Madam Victoria Irabor said they were all shocked and devastated by the unfortunate event because it could have been any woman’s husband.

“You can see the women are devastated, every woman feels the same way. It could have been any woman’s husband that is why you see all of us turned out in our uniforms to support our dear sister, the National President of NAOWA. Mrs Fati Attahiru and the other women” she said.

“We share in their grief but we know that the death of their husbands will not be in vain. Today, they are the heroes of Nigeria and we are proud of them and we take solace in the fact that they made so much sacrifice for the nation, just for the peace and security of Nigeria”.

“Today Nigeria is experiencing insecurity but our hope and believe is that their death is not in vain. By this death indeed, God will restore peace and security to Nigeria.” she added.

Earlier in the day, the airport reception team was already on ground at the Nnamdi Azikiwe International Abuja awaiting the arrival of the bodies of the Chief of Army Staff Lt. Gen Ibrahim Attahiru and other victims of the air force plane which crashed in Kaduna on Friday evening.

Their bodies were flown in from Kaduna in a military C130 aircraft, which taxied at the PAF area of the Abuja International Airport on arrival.

The mortal remains of the late General and his men were received by the burial party and subsequently conveyed to the military cemetery for burial.

But according to a report by The PUNCH, there was a slight disagreement between the family of the late Chief of Army Staff, Lt. Gen. Ibrahim Attahiru, and the Nigerian Army over the COAS’ burial.

The disagreement led to a short delay of the interment as his family insisted that he must be buried without a coffin in accordance with Islamic injunction.

But some senior army officers argued that Attahiru’s remains would be buried according to military traditions.

After some time, the family was eventually convinced by the superior arguments and the grave was widened to accommodate the coffin. 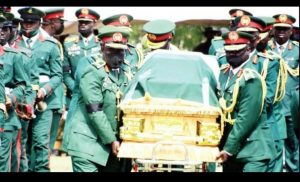 Attahiru and 10 other military officers were involved in the tragic crash on Friday evening at the Kaduna International Airport.

It was reported that the aircraft conveying the COAS and some senior military officers, with registration number 5N-R203, was billed to land at the Nigerian Airforce Base in the Mando area of Kaduna, but diverted to land at the civil airport due to bad weather conditions prevailing at the time.