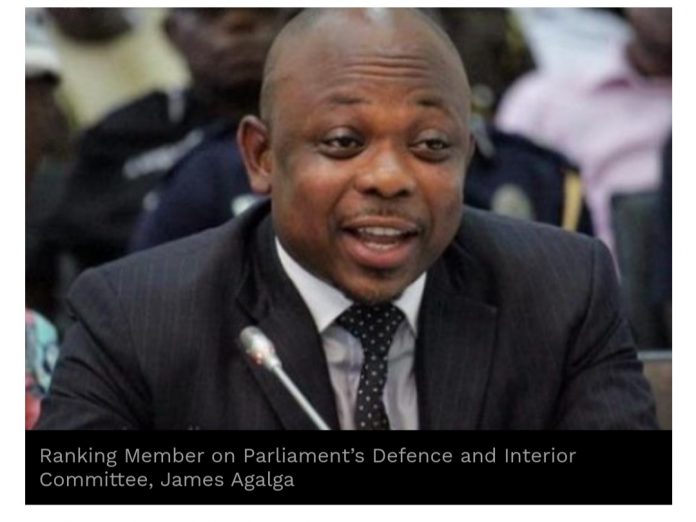 The Ranking Member on Parliament’s Defence and Interior Committee, James Agalga, says Parliament will look into the appointment of Lt. Col. Frank Agyeman as the Commanding Officer of the 64 Infantry Regiment of the Ghana Armed Forces.

“I am told that the officer who was reassigned and presented to the Chief of the Defence Staff for disciplinary actions has even now been appointed as the Commanding Officer of the 64 Infantry Regiment of the Ghana Armed Forces.

That is a matter that we will be interrogating in due course,” he stated.

Speaking to JoyNews, the Builsa North MP stated that the matter will be taken to the plenary should it escalate.

Lt. Col. Frank Agyeman, together with three other officers were, on May 20, relieved of their duties.

This was the outcome of preliminary investigations into the unmerited assault against Citi FM journalist Caleb Kudah.

This was contained in a press statement issued by the Ministry of National Security.

Lt. Col. Agyeman was stripped of his position as the Director of Operations at the National Security Ministry.

According to the Ministry, this is to “assure the general public and particularly all media practitioners that the Ministry will expeditiously investigate any complaints against any personnel of its agencies.”

But reports reveal that few hours following the Ministry’s decision, Lt. Col. Frank Agyeman on May 21, received a top Military appointment despite the aforementioned “inappropriate” conduct he displayed.

Mr James Agalga is of the firm belief that the appointment of Lt. Col. Agyeman to the new position, does not serve as a disincentive for military personnel who contravene the standard operating procedures of the National Security Ministry.

“So to some extent, it appears that the gentleman in question, Lt. Col. Agyeman has been rewarded for his misconduct,” he said.

As part of measures to address the incidence of assault by National Security operatives, Mr Agalga revealed that the position held by DSP Azugu at the National Security Ministry would be reviewed in line with a recommendation by the Emile Short Commission which investigated the violence that occurred during the 2019 Ayawaso West Wuogon Constituency by-election.

In addition, he noted that all Ministers responsible for security in the country would be engaged by the Parliamentary Committee on Defence and Interior to discuss how to resolve this menace.