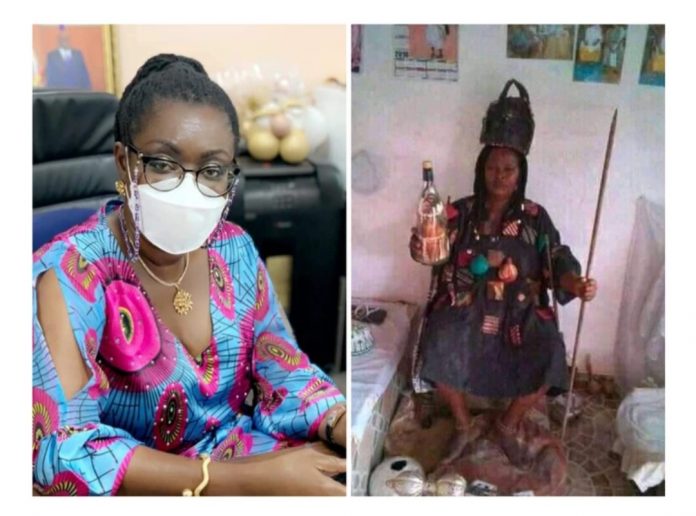 Reports making the rounds across news outlets has it that Nana Agradaa broke down in tears after she was arrested in a combined police swoop in the company of the Minister for Information and Digitalization and subsequently put behind bars at the BNI headquarters.

According to reports, Nana Agradaa is denying the fact that she has ever duped anyone of their money in her bid to double it up for them through her “Sika Gari” rituals.

Newstodaygh.com has sighted a trending video in which a man called Borga was seen advising all who have fallen victim to call certain numbers and provide evidence to the fact that they have been duped by the spiritualist while transacting “Sika Gari” rituals.

According to a breaking news report, state security had shut down two TV stations namely, ‘Thunder TV’ and ‘Ice1 TV’, which belong to the popular spiritualist known in private life as madam Patricia Asiedu, popularly known as Nana Agradaa at Kasoa.

The police in conjuction with some National Security personnel stormed the premises and seized some transmission equipment and closed down the stations for operating without the necessary authorization.

The two stations are among many others on the State’s list of targeted raids to close them down for operating without a valid license or authorization.

It has been alleged that the spiritualist has been involved in fraudulent acts to swindle her gullible audience under the pretext of doubling cash for them through her openly advertised ‘Sika Gari’ ritual concept.

The illegal TV stations are used as advertising channels to many unsuspecting Ghanaians who have fallen prey to Nana Agradaa’s money doubling scam.

The move comes on the back of the State’s effort at tackling swindlers, money doublers and other criminals masquerading as spiritualists in their bid to defraud their unsuspecting victims.

According to sources from the National Communications Authority (NCA), Nana Agradaa’s Thunder TV had its authorization revoked on March 24, 2020. Ice1 TV, a sister station, had also been operating illegally despite a written directive to cease operations after its expiry since February 26, 2020.

She is an Accra-based self-styled fetish priestess or spiritualist who has been at the center of numerous reported fraudulent activities in the name of spiritualism.

Her operations had been reported by many to the police on several occasions by people who had fallen prey to her money doubling scams while others remained silent for fear of being targeted by the spiritualist.

It was also alleged that she has some big wigs in the law enforcement agencies on her payroll, hence her unabated impunity to carry out her money doubling scam and rituals without fear of being reprimanded by the law.