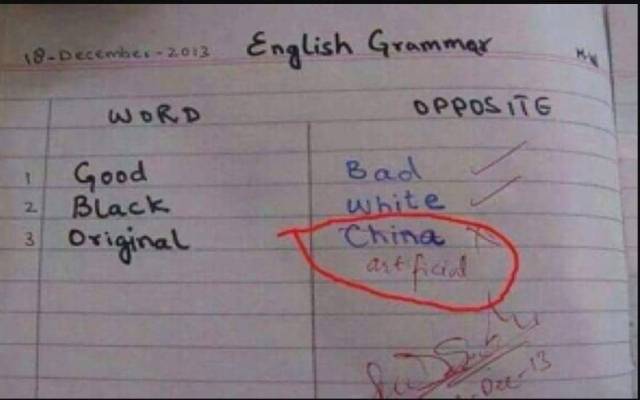 This photo has profound implications for me as a person interested in education in this country. Please look at the photo again and tell me what you make of it.

They say a picture is worth a thousand words but how will you hear the picture if you have no idea what language the picture is talking to you in especially at this time when school children have been at home for a couple of months due to the covid pandemic and they are heading back to school in a short while.

First and foremost, this picture is not from a rural area. Yes! From the way the date is written it is obvious that it is from an urban or peri urban school, the teacher wrote the date for the pupil since it is the same handwriting used for the correction.

Furthermore, it is obvious that the cultural shocks and influence change with the different generations. During my time for example in the 80s when my generation were attending basic school, we had not heard of China. The only popular countries we knew were Russia, the USA and Britain. France didn’t even come in the picture.

For some of us nerds, we were aware of the Cold War and the ongoing battle between the capitalist and communist superpowers vis-a-vis the spy wars between the western powers of Britain and USA and the eastern bloc of Russia and Germany. Oh how I loved reading those counterespionage novels from authors like Robert Ludlum, Eric von Lustbader, Tom Clancy and the rest.

Recently, China has become a world super power with its population about one third of the total world population. The Chinese have grown their traditions and harnessed their culture into a global force to reckon with. With basic raw material production and manufacturing industries, it is evident that China will continue to be a global hub for a long time to come. Especially with the Covid 19 pandemic, we have had to hear the Chinese roar loudest since the pandemic has been one to shut the world down since the last pandemic in the early 20th century. China has used the pandemic to leverage its position as a world super power.

It is said that the Chinese produce cheaper durable goods for all, which are actually meant to meet every pocket in the society.

This accounts for the basic school child’s answer to what is the opposite of original. To the child, original is authentic, as produced in the west, and China is fake.
The child’s mentality in this case is evident of the social fabric and global structure as mentioned earlier.

The Chinese have taken over every aspect of retail trading with their consumer products and can reproduce just about ANYTHING.

Delving deeper into the child’s answers also reveals the standards of education that exists in Africa now. Here is where the focus of this article is. This picture is obviously set in Ghana but then it is a global phenomenon.

The opposite of good is bad, the opposite of black, truly is white and the opposite of original is fake. The teacher’s correction of artificial is rather suited to the word ‘natural’ and I wonder what was running through the teacher’s mind with such a correction.
Sadly, it most likely that the parents of this pupil may not even see it because they have been caught in the rat race in the quest for money to pay the very fees that is giving their ward this education. How ironic!

We need to back up with our education not only in the visual arts and science but also in our history and culture. It is important that our younger generations know the history of Africa as having prospered long before the European set foot on the continent.

The stories of Mansa Musah, Sundiata, the Pharaohs of Egypt and civilizations along the Tigris, Nile and Euphrates should be taught. Let our children learn about the battle formations of Chaka the Zulu that ensured that he was never conquered, his scorch earth policy which same was adopted by the Russians to defeat Napoleon after he crossed the Rubicon. How about the Asante battle formation (designed by Osei Tutu and Komfo Anokye) that even determined their political system in the king’s court as even exists today.

Yes! I’m sure some of you readers are dumbfounded but this is no Martian tale. This is the story of Africa. An Africa that we can all recapture if we set out policies right.
But alas! The culture of western capitalism and selfishness has deeply penetrated our social fabric and we need more than education to wean it out. Our policymakers make policies to suit western whims because we go begging for aid for development. All we have is our hope and our religion.

As for religion, I won’t even tackle it.

Let us arise as an Africa to reclaim what it used to be. The other cultures have been able to do it. The Chinese have done it and see where they are now. Will we as Africans forever be in the bondage of slavery, one way or the other?
One simple picture, and see where I have gone to. Maybe that is me. I look at the global picture. I am not really a thinker but then I’m a pointer, trying to point out what is wrong with our system.

Our ancestors have said that ‘sankofa, yen tsi’ to wit going back for your past is not a taboo.

Our solutions to our problems lie in our traditions and culture and we can only get to that if we know our history – not the one the European wrote for us. The one in our songs and drum language and our oral traditions. The one handed down by our forefathers through the generations.

For me, it begins with YOU!
Africa Arise!