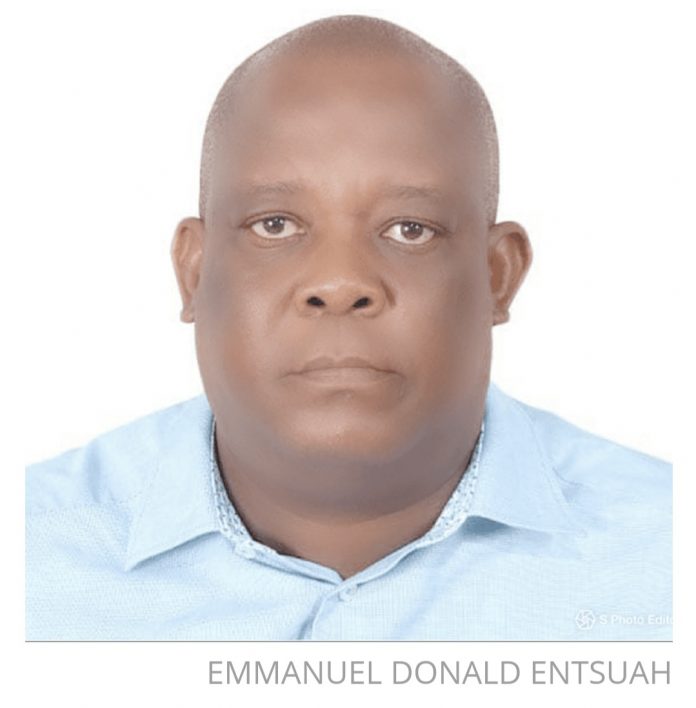 Profile of Ghana’s biggest Galamsey lord, Emmanuel Donald Entsuah who allegedly has politicians in his “pocket”.

Mr Entsuah is a professional in Marketing. He has over twenty years of experience in developing and executing marketing strategies.

He holds a Bachelor’s Degree in Marketing from the Ghana Institute of Management and Public Administration and a Diploma in Business Studies from the Takoradi Polytechnic.

He has a worth of experience as he is currently the General Manager of Ghana Canada Mining Company Limited, Director for Unique Starpoint Company Limited and was the Chief Operations Officer for Class Media Group amongst other several business acumen.

According to Kennedy Agyapong, he sued one Galamsey lord called Emmanuel Donald Entsuah and won the case but it still haven’t stopped him from his Galamsey business.

He says the guy is currently in the forest going on with his Galamsey business because of the protection he gets from some NPP bigwigs.

The Herald’s investigations into the involvement of the Ghana Armed Forces in government’s fight against illegal mining, has suggested that the enviable record of the Ghana’s Army, is being dragged in the mud by some top military officers with a long term implication for the reputation of the country.

This paper’s investigation shows that, Ghana Army, is not fighting illegal mining, but rather encouraging the destruction of Ghana’s environment, leaving behind polluted water bodies and deforestation by providing security to the very companies which are involved in the acts.

The companies, have sometimes acted in a manner that suggested “bribery” of Ghana’s military to secure their operations which elements of the Akufo-Addo government, including ministers had at various times raised issues with, continue unabated.

One of such companies is the Heritage Imperial Mining Company Ltd, which have had its activities brought to the attentions of the dissolved Inter-Ministerial Committee on Galamsey in 2019, then led by Prof.

Kwabena Frimpong Boateng, as well as the then sector Minister for Land and Natural Resources, Kwaku Asomah-Cheremeh.

Interestingly, officials of the Ghana Canada Aleska Mining or C&G Aleksa Mines, have been captured as linked to another mining company by name Heritage Imperial Company Ltd, which had been cited to be behind the mining activities in Tontokrom, where Ghana’s Army and some of its top bosses have been captured as aiding the wanton devastation of the environment.

In particular, Donald Emmanuel Entsuah, has been found to the Managing Director of Heritage Imperial Company Ltd and also operates under the Ghana Canada Aleska Mining or C&G Aleksa Mines.

The Herald’s investigation revealed that Donald Emmanuel Entsuah, before venturing into mining and living an ostentatious lifestyle, used to work for Viasat 1, a Ghanaian television channel owned by the Swedish listed media group, Modern Times Group, which has since re-branded to Kwesé Free Sports in 2016.

Those who know him well said he is a frequent visitor to the Labone Coffee shop and mostly seen in the company some prominent journalists with ties to the Akufo-Addo government.

The project, at the Southern Command of the Ghana Armed Forces, at Teshie in Accra, C&G Aleksa Mines, said was a way of giving back to society what society contributes to it.

Also read: How Galamsey is killing our forests and water bodies.

The project involved re-construction and asphalting of the main entrance road that leads to the administration block; asphalting of visitors’ car park, as well as, tarring of the entire 300metre square Parade Square, all of which had been in very deplorable state for a long time, hitherto.

The work also included installation of CCTV cameras and other security fittings at the Command, at cost of a whopping two million Ghana Cedis.

A news report on the project at the time said that its completion has visibly transformed the military base, particularly, the front view.

Interestingly, the projects had already been handed over to the authorities of the Southern Command, led by Brigadier-General Thomas Oppong-Peprah, who is currently the Army Commander with a rank of a Major-General.

The site is being managed by Heritage Imperial Company Ltd under the protection of personnel of the Ghana Armed Forces (GAF).

A reporter with Star FM, had reported a visit to the Southern Command on Thursday, September 25, 2018, the front view arena now looks extremely marvelous and firm- showing there has been major transformation.

The Chief Executive Officer (CEO) of the company, Simon Aydin, when contacted, said the project was in line with the company’s civic responsibilities to society, which are being undertaken at various sectors, mostly at its mining enclaves in the Wassa Amenfi area.

Simon Aydin, had mentioned that plans are far advanced to commence the second phase of the project at the Southern Command which involves construction of all link-roads within the Command.

Mr Aydin explains, the company is determined and very committed to contribute its quota to society, as a responsible and law-abiding entity, in order to lessen the burden on the government.

He assured that the company would not renege on its corporate social responsibilities, adding that, these interventions form the “core values” of the company and are in the heart of Management.

It was further reported that the Teshie Southern Command of the GAF was not the only place that has benefitted from the mining firm’s social responsibility projects, as many communities in the company’s catchment areas of operation, such as, Sraha, Dwobo, Ayem, Amanase, Akatrika, as well as, Ajakamanso all in the Western region, have been supported and still benefiting.

For instance, the six-unit classroom facility the company promised the Amanase community is near completion while also a clinic was about to start as soon as the completion of the school.

Dwobo community also has asked the company to help them complete their Community Centre project, which is currently under construction.

At Ayem community, C&G Aleksa Ltd, is again undertaking KVIP toilet facility, which is under construction, in addition to a cash amount of GH¢80, 000 given to the community.

Again, it was reported that the company was constructing in Akatrika community, a major bridge after it had dug boreholes for that community alongside other immeasurable contributions made to the people.

C&G Aleksa had also donated two incubators to Kokrokoo Charities amounting to US$20,000.