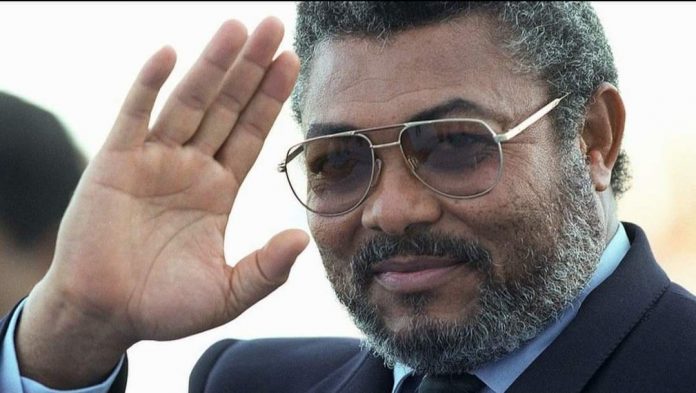 A state funeral service was held at Independence Square to mark the fourth and last day of the final funeral rites for the late president Jerry John Rawlings.

The former President died at the Korle Bu Teaching hospital after a short illness on November 12, 2020.

Former President Rawlings has been eulogized as contributing immensely to the thriving of democratic rule and stability in Ghana since 1993.

The national activities started on Sunday, January 24, with a Catholic Requiem Mass at the Holy Spirit Cathedral and a vigil at the Air Force Officers Mess in Accra.

The late president was laid in state on Monday, January 25th, and Tuesday, January 26th, at the Accra International Conference Centre for various interest groups and members of the general public to have an opportunity to pay their last respects.

In attendance at the burial service were the widow Nana Konadu Agyeman-Rawlings and her children at all the events. The president Nana Addo Dankwa Akufo-Addo, his vice and their spouses were also in attendance. Others included former presidents J.A. Kufuor and John Dramani Mahama, foreign dignitaries, the Ghana Armed Forces high command, members of Parliament and the judiciary, government officials, political leaders, diplomats, and the general public.

His mortal remains were subsequently conveyed to the Military Cemetery in Burma Camp on a gun carriage where he was buried with full military honors as a president and former Commander in Chief of the Ghana armed forces. This was crowned by a 21-gun salute by the artillery regiment.

Former President Jerry John Rawlings was born on June 22, 1947, in Accra, Ghana, to madam Victoria Agbotui, a Ewe from Dzelukope, Keta, and James Ramsey John, a chemist from Castle Douglas in Kirkcudbrightshire, Scotland.

Rawlings finished his secondary education at Achimota College in 1967. He joined the Ghana Air Force shortly afterwards; on his application, the military switched his surname John and his middle name Rawlings. In March 1968, he was posted to Takoradi, in Ghana’s Western Region, to continue his studies. He graduated in January 1969 and was commissioned as a pilot officer, winning the coveted “Speed Bird Trophy” as the best cadet in flying the Su-7 ground attack supersonic jet aircraft as he was skilled in aerobatics.

He earned the rank of flight lieutenant in April 1978. During his service with the Ghana Air Force, Rawlings perceived deterioration in discipline and morale due to corruption in the Supreme Military Council (SMC).

In June 1979, Rawlings and other junior officers led a successful military coup with the purported aim of purging the military and public life of widespread corruption. He and his military junta formed the Armed Forces Revolutionary Council (AFRC) ruled for 112 days. During that time, former heads of state, Gen. Ignatius Kutu Acheampong and Lt. Gen. F.W.K. Akuffo was tried and executed with other high-ranking colleagues for corruption.

Rawlings then yielded power to a freely elected civilian government led by Dr. Hilla Limann, who became president of the third Republic. Limann later retired Rawlings from the air force together with members of his military junta.

Rawlings continued to be a popular figure. However, on December 31, 1981, after two years of civilian rule during which Ghana’s economy continued to deteriorate, he overthrew Limann’s government, accusing it of leading the nation “down to total economic ruin.” Rawlings established a Provisional National Defense Council (PNDC) as the new government which ruled Ghana for 9 years (1981-1992).

Limann and several other politicians were tried and sent to prison for corrupt acts. Limann was placed under house arrest for a few years. The “Peoples’ Defense Committees” were set up in neighborhoods, as were workers’ councils to monitor production in factories and other government departments and agencies.

But when the failure of these policies and other populist measures had become clear by 1983, Rawlings and his PNDC government reversed course and adopted conservative economic policies, including dropping subsidies and price controls in order to reduce inflation, privatizing many state-owned companies, and devaluing the currency in order to stimulate exports. These free-market measures sharply revived Ghana’s economy, which by the early 1990s had one of the highest growth rates in Africa.

In 1992, in the first presidential elections held in Ghana since 1979, Rawlings was elected president. This began the tenure of the 4th Republic under the National Democratic Congress (NDC) Party. He was again reelected in 1996 for a second 4-year term in office and stepped down in early 2001 after 19 years of ruling Ghana. Rawlings thus became the longest-serving president of Ghana since independence.

Rawlings was married to Nana Konadu Agyeman, whom he met while at Achimota College. They had three daughters; Zanetor Rawlings, Yaa Asantewaa Rawlings, Amina Rawlings; and one son, Kimathi Rawlings.