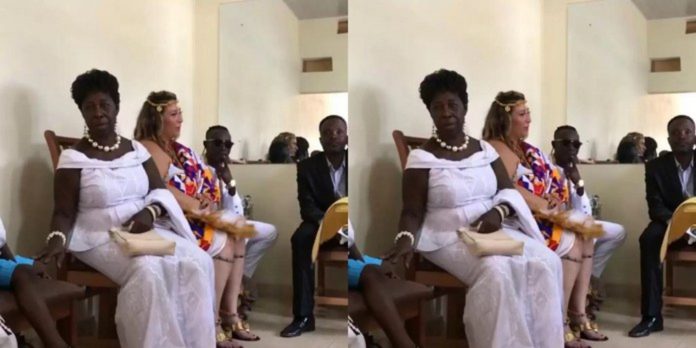 The ceremony is reported to be currently going at Cedi Lounge and Kitchen at Agona Swedru in the Central Region.

The musician known in private life as Justice Amoah and his lover, Liha Miller popularly known as Queen Peezy portrayed rich Ghanaian culture at the ceremony.

Liha Miller was captured all glammed up in kente, adorned with beads with a curled short hair.

Patapaa who sat close to his wife also wore a white caftan with beads and an Ahenema to match.

Just like every marriage ceremony, the newly-weds were offered marital advice.

Barcelona eyeing a move for Aguero

Business Anna - January 23, 2021 0
The embassy of Ghana has announced that Ghana's proud A1 bread has spread its wings to the United States in a special partnership agreement...

Akufo Addo Get Praises From Kelvin Taylor For Appointing Mustapha Yussif As Sports...

Entertainment Ruth Botchway - January 23, 2021 0
The Member of Parliament for Kwabre East Constituency in the Ashanti Region, Francisca Oteng has finally waded into her relationship life in a recent...

Akufo Addo Get Praises From Kelvin Taylor For Appointing Mustapha...