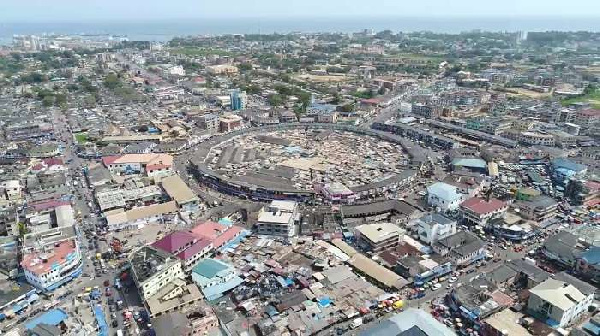 Sekondi-Takoradi mayor Abdul Issah Mumin has announced that the Takoradi Market Circle will be closed down to all forms of trading activities from Monday, May 3.

The Sekondi-Takoradi Metropolitan Chief Executive explains that the directive is to enable the assembly to hand over the market to the contractor for redevelopment works to begin.

The 90-year-old Takoradi Market is being redeveloped.

Relocation of traders at the market is far advanced as the place being prepared for them is about 90 per cent complete.

However, the Assembly has missed the February 22, 2021 deadline to have handed over the market to the contractor, CONTRACTA, to commence work.

This was because work at the relocation site close to the Takoradi Ahenfie Hotel was not completed to enable the relocation of the traders from the old market.

At a meeting with market queens to brief them on the progress of work, Sekondi Takoradi mayor Abdul Issah Mumin affirmed that the assembly will not want to miss the hand over deadline as the “state is incurring cost as the contractors, their workers and equipment continue to lie idle”.

His announcement was, however, met with opposition from the market queens.

In unison, they insisted that some of their members have not been allotted places to trade at the new site and wondered where they will go with their wares on Monday.

“In the presentation by the Works Engineer, he admitted that the relocation area is 90 per cent complete. Again, if you go around, you will realize that some people do not have places. We know you are doing your best but there are teething problems you have to resolve first. So, we are pleading for an extension by which time we would have had places at the new site,” one of the protesting traders said

But, in response, the Mayor insisted that there will be no extension.

“Even if we give you the end of the month you come back and plead for an extension. We will not grant the extension. But I can assure you that by Monday everyone will get a place. We are working day and night to ensure that everything go as planned.”

He added that the Monday operation will involve the police and military to ensure full compliance.

“The military and the police will be around to make sure that everything goes as planned. They are not to intimidate anyone but to ensure that their wares are not stolen in the cause of the relocation.”