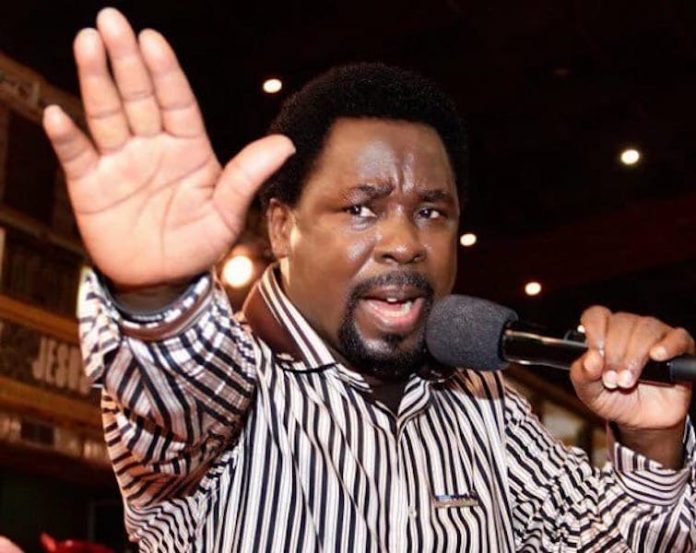 This article shares with you the sudden demise of two prominent Pastors in Nigeria within a period of just one month which has shocked the world.

Sources close to newstodaygh.com has confirmed that when Prophet TB Joshua, the founder of the Synagogue Church of All Nations (SCOAN), condoled with Bishop Enoch Adeboye, the general overseer of the Redeemed Christian Church Of God (RCCG), over the death of his son, Dare Adeboye, little did he know that his own passing was very close at hand.

According to reliable sources from the church, the famous preacher of the Synagogue preacher had suffered a stroke about two months ago, but it was not disclosed publicly. It is therefore possible that T.B Joshua might have died from complications related to his suffering from the stroke.

Incidentally, the Synagogue Church founder died on June 5, 2021, while Pastor Dare also died on May 5, 2021 and was buried on May 11 of the same month.

According to Church sources, T.B Joshua was speaking at a service after the death of the younger Adeboye when he said it is how well an individual lives that matters and not how long. He might have been talking about himself as well and how short his life was going to be on earth.

While comforting the bereaved family, he is reported to have prayed to God to comfort the Adeboye family and strengthen the RCCG ministry.

Isn’t it therefore very surprising, but sad to hear that the great men of God whom many run to whenever they face problems and difficulties in life are rather the ones beginning to depart from this world and the people they have counseled and helped for many years?

These are some of the questions many have posted on their social media handles in reaction to the demise of the popular Prophet T.B Joshua.

Many are also asking why and how T.B Joshua could just die suddenly like that and without any warning.

Within the last three years, renowned pastors like William Graham, Thomas Monson, Luis Palau, Reinhard Bonnke, and quite recently Dare Oyedepo and now T.B Joshua who were once powerful preachers of the Gospel have died because they are not God.

The once revered men of God have died because they are also mortals just like any of us and thus today we are; tomorrow we are not. No one knows what tomorrow brings except God himself.

The General Overseer of the Redeemed Christian Church of God Worldwide Bishop Oyedepo’s son’s death hit the Christian community soo hard. His death has left many still wondering why a great man of God’s son who is also a pastor could just die suddenly in his sleep only a few days to his birthday.

Sources close to the RCCG ministry confirmed that Pastor Dare was the third son of Bishop Oyedepo. The young preacherman reportedly died on May 5, 2021.

This is exactly one month ago to T.B Joshua’s demise.

He was a philanthropist and founder of the Synagogue Church of All Nations (SCOAN). He also owns a TV station which operates on the popular Emmanuel TV channel which is broadcast all over the world.

He was also deemed to be one of the most controversial preachermen the world had seen in recent times. His televised programmes were screened Live and watched daily by over a million people worldwide.

Surprisingly enough, Prophet T.B Joshua also died suddenly on June 5, 2021 shortly after ministering to his congregation. This is exactly one month after young Adeboye’s demise.

In a post sighted on the official SCOAN Facebook page, this is what the late Prophet’s wife Evelyn said about how he died:

“He ended the race prayerfully. He spent about three hours in prayers before the last service on the mountain and was looking very healthy.

“He never showed any sign of illness or worry…

“Afterward, he came up to shower. Few Minutes later, he stepped out for ministrations. While MInistering, he spoke about a time to come and time to leave.

“His statements were spiritual and suddenly, he left the stage and went to his inner chambers.

I waited a few minutes and thereafter I decided to check on him. I met him sitting on the chair like someone reflecting but unconscious.

His disciples came and tried to revive him to no avail. Of a truth, he went home to be with the Lord and left us with a message, watch and pray.”

Many might be tempted to read lots of spiritual and perhaps astrological meanings into these unfortunate incidents which have happened to the Nigerian Christian community in just one month.

Let us pray for SCOAN and Nigeria as they morn the passing of T.B Joshua in this difficult time.

May the souls of the departed pastors rest in perfect peace.

What do you think about all this? Let’s share your thoughts.