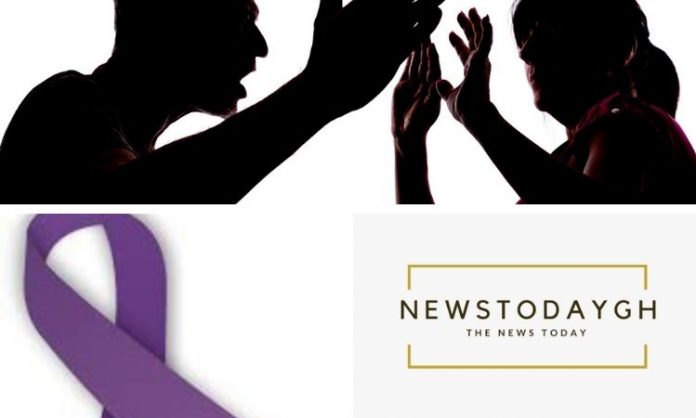 Domestic violence, according to the United Nations is a pattern of behaviour in any relationship that is used to gain or maintain power and control over an intimate partner.

Although it is generally accepted that anyone can be a victim of domestic violence regardless of age, race, gender, sexual orientation, faith or class, global figures suggest that women tend to bear the brunt of domestic abuses worldwide.

According to The United Nations Women organization, some national studies show that up to 70% of women have experienced physical and/or violence from an intimate partner.

Ghana, like many African countries, struggles with the phenomenon of domestic violence, with statistics skewed largely against women.

Remarkably, much of this domestic violence has been regarded as acceptable, and this has been one of the biggest challenges to eradicating the problem in Ghana and Africa as a whole.

Statistics of a recent survey revealed that 60% of Ghanaian women believed that husbands were justified in beating their wives. A separate study showed that 51% of African women reported that being beaten by their husbands is justified if they either go out without permission, neglect the children, argue back, refuse to have sex, or burn the food.

To further emphasize this apparent acceptance and reluctance to tackle domestic violence head-on, It wasn’t until 2007 that marital rape was criminalized in Ghana.

The Nigerian penal code, which applies to the Northern States, is another stark reminder of the not only social acceptance but judicial tolerance of this canker; To illustrate this, Section 55 (1)(d) of the penal code provides thus;

55. (1) nothing is an offence which does not amount to the infliction of a child, pupil, grievous hurt upon a person and which is done-
(d) by a husband for the purpose of correcting his wife such husband and wife being subject to any customary law in which the correction is recognized as lawful.

This is further illustrated by a Nigerian study which revealed that police officers tended to remind wives who reported physical violence that their ‘Yoruba culture’ permits men to beat women (Atinmo, 1997; Atinmo, 2001). With this historically lukewarm attitude towards domestic violence, it is not surprising that many victims are reluctant to report incidences of domestic violence when they occur.

Institutional interventions
Refreshingly, there have been several institutional attempts to correct the wrongs of the past. This article seeks to discuss two of the significant steps taken by the Government of Ghana (GoG) to control, reduce and ultimately eliminate the canker of domestic violence from the Ghanaian populace.

The first tool deployed by the GoG is the establishment of the Domestic Violence and Support Unit (DOVVSU) within the Ghana Police Service. The second important tool is the passing of legislation to criminalize the act of domestic violence in Ghana. These two efforts by the GoG are discussed in detail below.

Domestic Violence and Support Unit (DOVVSU)
The DOVVSU, previously known as the Women and Juvenile Unit (WAJU) was established in October 1998 in response to what then was the increasing number of reported cases of abuse against women and children. In 2005 however, there was the need for a name change due to the perception that the unit was a place for only women and children to seek redress. This had made many men reluctant to report cases of domestic abuse against them.

The mission of the Unit is to prevent, protect, apprehend and prosecute perpetrators of domestic violence and child abuse. Its vision is to create an environment where domestic violence and other forms of abuse would be freely reported and to collaborate with stakeholders to provide coordinated timely responses to victims.

The Domestic Violence Act,2007 (Act 732)
The Domestic Violence Act, 2007 (Act 732) became law on 3 May 2007. Its promulgation was an acknowledgement of the increasing problem of domestic violence in Ghanaian homes and the need for a dedicated piece of legislation to ensure the phenomenon was appropriately dealt with. The memorandum to the Bill provides insight into its broad aims and strategies. Amongst others, it stated thus,

The objective of this bill is to;
(1) provide victims of domestic violence with a broader set of remedies in the form of protection orders;
(2) legislation on domestic violence will uphold provisions in the constitution on respect for human dignity under Article 1, amongst other human rights provisions… emphasis mine

Strengths of The Domestic Violence Act, 2007 (act 732)
Definition of Domestic Violence
One of the first issues the Act tackles is to expand on the definition of domestic violence to encompass a wider range of abuse, and to conform to international standards as provided for in the Convention on the Elimination of all Forms of Abuse Against Women (CEDAW).

The Act defines domestic abuse to include not only physical abuse but sexual, economic, emotional or psychological abuse, as well as inhuman and degrading treatment or punishment. This enhanced and expanded definition provides a wider net within which perpetrators of domestic violence can be caught.

Capacity to report
In a quest to tackle the social and cultural inhibitions to reporting incidents of domestic violence, the Act expands the category of persons who can make reports on behalf of victims. A person with information on domestic abuse, social workers, health providers, family members amongst others may make a report. This provision goes a long way to reduce the pressure on victims not to report such incidents since they can be reported by various other persons.

Role of The Police
The Act, in acknowledgement of the age-old problem of police apathy towards reports of domestic violence, removes any form of police discretion in the handling of such complaints. Section 7 of the Act makes it mandatory for the police to respond to requests for assistance…
7. A police officer shall respond to a request by a person for assistance from domestic violence and shall offer the protection that the circumstances of the case or the person who made the report requires, even when the person reporting is not the victim of the domestic violence.

The Act under Section 8 also mandates the police to assist victims to obtain medical treatment, and further goes on to state that such medical treatment is to be provided free of charge by the state.

Challenges of The Domestic Violence Act
The Act has a total of 42 sections, together which seek to provide a legal support framework for the police and judicial systems to effectively combat and eliminate the scourge of domestic violence. On paper, the Act looks solid but has been fraught with challenges in its implementation.

Unfortunately despite the enhanced means for reporting domestic violence incidents, the cultural and social inhibitors to a large extent still exist thus many cases remain unreported.

A 2019 Action Aid Study on fighting domestic violence in Ghana found DOVVSU to be severely under-resourced in carrying out its mandate under the Act. Aside from the limited logistics and infrastructure available, it was found that the number of police personnel assigned to the unit was well below the required number to operate efficiently.

The study also found that despite the provision in the Act for free medical treatment for victims, most victims were still having to pay sums between GHS200.00 and GHS500.00 for medical assessment.

A 2018 study led by the International Federation of Women Lawyers (FIDA)-Ghana, which researched into why few women applied for protection and occupation orders revealed that victims of domestic abuse were forced to pay for medical treatment, and also found that officers of DOVVSU demanded money from victims before taking up their cases. This has resulted in many applicants abandoning their cases because they cannot afford the fees, and thus continue to suffer in silence.

The ActionAid study also established that there were no professional personnel such as counsellors to provide critical support services to victims of domestic violence.

Perhaps most importantly, the victim support fund as provided for under the Act has not been set up. Much of what the Act seeks to achieve hinges on financial support and the importance of the fund cannot be emphasized more.

Conclusion
Ghana no doubt has a rigorous legal framework which on paper does a good job at tackling domestic violence, but as with many of our laws, the challenge remains in its implementation. There have been major strides in providing logistical support to the police from government and the private sector, however, a lot more is required to finally put a lid on the pervasive cancer of domestic violence.

The domestic violence Fund must be set up as a matter of urgency to provide the needed financial support for treatment of victims, provision of safe houses, training and other critical support services.
The police service must investigate and punish officers responsible for charging victims before taking up their cases since this has been determined to be a key deterrent for would be applicants.
Finally, a lot more has to be done by way of public education and sensitization on the prevention and dangers of domestic abuse, and the support processes available for victims.