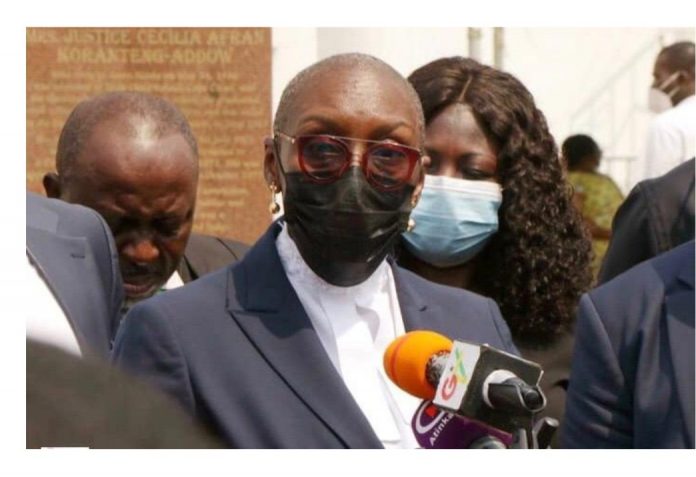 The spokesperson for the National Democratic Congress party (NDC) legal team, in the 2020 election petition, Marietta Brew Appiah-Oppong, has said that the Electoral Commission (EC) cannot avoid being crossed examine by their lawyer Tsatsu Tsikata in the ongoing hearing.

“They are avoiding or running away or avoiding the cross examination of Lawyer Tsikata, remember that this an Electoral Commission that has a constitutional duty to the people, they have an obligation to account to us for their stewardship and they say they cannot take the witness stand,” she said.

“Well tomorrow, we will see how our lordships will rule on this, and the issue was raised as to wether this is a human right issue, I don’t know, this is the Electoral Commission chair, a body created by the constitution Which has an obligation to respond to our question.”

She further argued, “The Electoral Commission cannot hide under human right to say they will not answer our questions, so I respectfully disagree with her ladyship when she says it is a human rights issue, I disagree with that.”

Ec In Techiman South Runs After NDC Leaders There

She believes they still have a strong case after the final cross examination of their final witness Rojo Mettle Nunoo.

Former President John Dramani Mahama, Petitioner for the NDC’s ongoing election 2020 petition at the Supreme Court of Ghana, has hereby closed his case after calling three witnesses in support of the petition he filed on December 30, 2020, essentially challenging the results of the December 7, Presidential elections last year.

The Petitioner’s witnesses who testified before the seven-member Supreme Court panel presided over by Chief Justice Anin Yeboah, included Johnson Aseidu Nketia, the General Secretary of the National Democratic Congress (NDC), and two others, Michael Kpessa Whyte and Joseph Robert Mettle Nunoo, both of which represented the Petitioner at the National Collation Centre of the Electoral Commission (EC) during the 2020 elections.