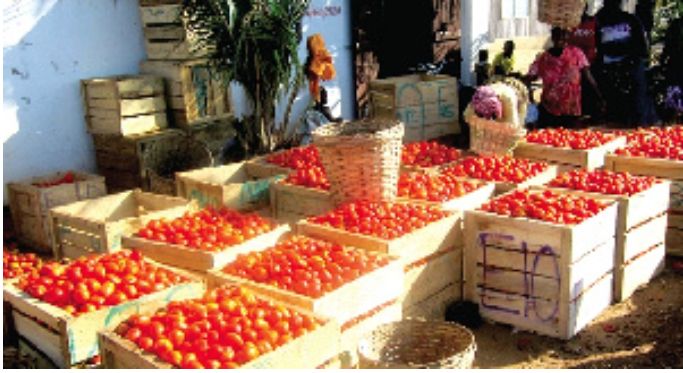 The Tomato Traders and Transporters Association of Ghana are ready and set to embark on a demonstration coming off on Sunday, 7 February, 2020.

The traders are protesting against recent spate of armed robbers attacking some traders on the Kumasi-Bolga-Burkina Faso road.

According to association,no measure has been employed to curb the increasing robbery attacks on its members.
They further noted that despite complaints to the Inspector General of Police (IGP), James Oppong Boanuh nothing has been done.

During a press conference on Friday, 5 February 2020, National Vice-Chairman of the Association, Abraham Nana Poku noted that, “We’re by this medium cautioning all tomato drivers in Ghana, who transport tomatoes with their vehicles that from Sunday, we do not want to see them on the roads, transporting tomatoes. Whoever, disobeys this order and goes to transport tomatoes, we’re telling all Ghanaians that we’ll destroy their tomatoes.

“Because we’ve informed government and his IGP but they ignored us. So we’re taking the law into our hands to do what’s in our best interest, that way, they’ll value us [the association].”

The association added that the authorities have remained silence about the issue so the association decides to embark on a strike from Sunday.

“Last week, we decided to send letters to District and Regional Commanders and wait for the results. It’s been over a week, we haven’t heard or seen anything. With today’s incident, we’re standing firm, we have over 1500 members and so we rotate. We have vehicles inside, we know when they’ll leave, when they do, from Sunday, we won’t allow any of the vehicles to cross the border again.”

Nana Agradaa sentenced to GHc36,000 fine or in default, 3 years in the can

News Citizen Atare - June 22, 2021 0
London Court throws out AG, others for sleeping on $170m case The Commercial Court in London, has refused to allow Ghana to bring a belated...

Kennedy Agyapong Cuts Sod To Construct A Cardio Centre At The...

Kennedy Agyapong Cuts Sod To Construct A Cardio Centre At The...