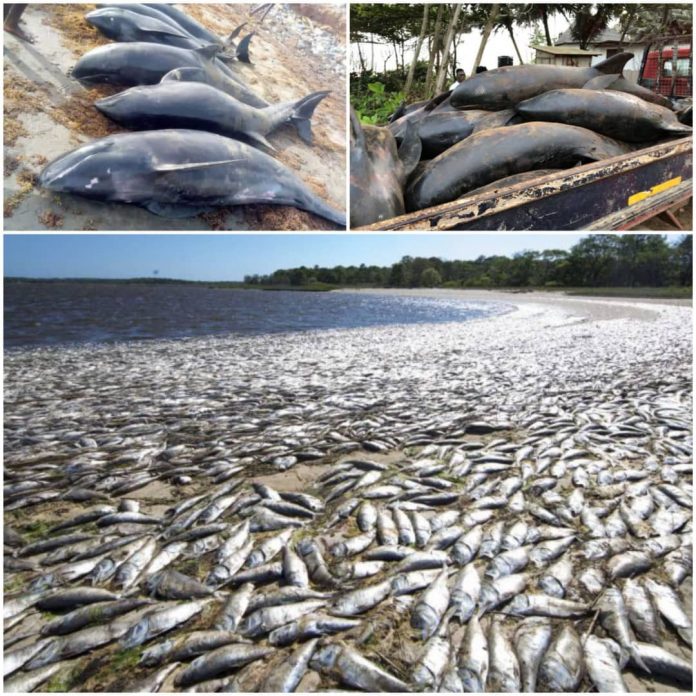 Researchers at the University of Ghana (UG) have concluded that some dolphins and other species of fish have washed ashore last week due to low oxygen concentration in the waters.

Preliminary investigations conducted by the Marine and Fisheries Sciences Department revealed that “most parameters required for life in the ocean were within acceptable limits, with the exception of Chemical Oxygen Demand, which was significantly higher than expected.”

This comes on the back of tons of fish washed ashore in Accra which attracted many residents, some of who picked them up either for consumption or for sale during the Easter festivities.

Similarly, some 60 dead dolphins were sighted at the shores of Axim-Bewire in the Nzema East Municipality of the Western Region.

The Fisheries and Aquaculture Minister, Mavis Hawa Koomson, had revealed that fish stress was what caused the mass fish deaths that washed ashore at Osu beach per preliminary investigations by Veterinary Doctors of the Fish Health Unit of the Fisheries Commission.

Fresh information from the UG researchers corroborates this:

“This oxygen demand would most likely create a condition of stress on living organisms that depend on dissolved oxygen in the water body.”

The department’s press release on April 11 said it observed a sudden drop in sea surface temperature in the coastal waters from Cote d’Ivoire to Togo a few days to the washing ashore of the fish.

Although it was not yet clear what may have triggered the development:

“This is most likely an indication of upwelled water from the bottom of the ocean, probably carrying low oxygen concentration.”

The statement, signed by the head of the department, used the opportunity to appeal to the government to procure ferries geared towards monitoring marine for research purposes as global warming presents new challenges within the field.

“We depend very much on the marine living and non-living resources for a significant portion of our national wealth. It is implicit that we protect this asset through regular monitoring so as to avert any future calamity. The impact of global climate change and its vulnerability is real and coastal states are the worst to be affected,” the statement added.