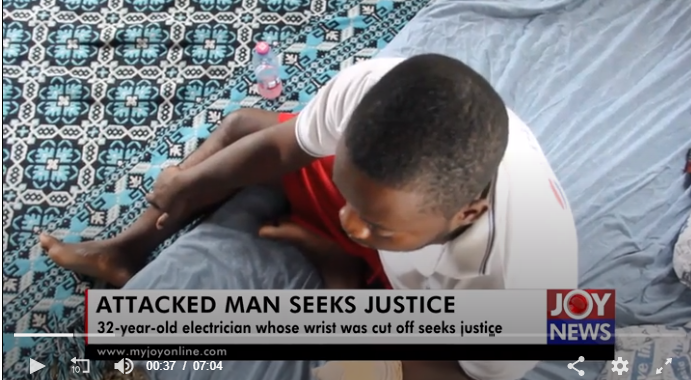 Mohammed Murtala, A 32-year-old electrician, whose wrist was chopped off in an argument, is seeking justice.

The electrician, narrating his pain to Joy News, said the three crooks rushed his house in search of his neighbour who was charged with beating two children over the placement of their hen coop.

He said he only interceded to calm his tribesmen who pressurized to deal with the said neighbour should he come out of his room.

He said in the course of the heated squabble and threats, one of the suspects ordered his associate to butcher him ‘like a sheep’.

True to their threats, two strikes were issued, which he blocked with his left hand; and the blood that oozed out alert him his wrist had been amputated.

It took his shouts for his neighbour, Zakaria Abdul Rahman to rush out of his room and rush him to the hospital.

The detached hand was stored in a plastic bag as they made rounds at the Manhyia Government Hospital and consequently the Komfo Anokye Teaching Hospital.

However, the doctor on duty said the delay had made the hand inactive and repairing it to the rest of the arm will only cause further problems to the body.

The electrician, who divulged he is the breadwinner of his family, is appealing with the district court, where the case is, to give him the justice he deserves.