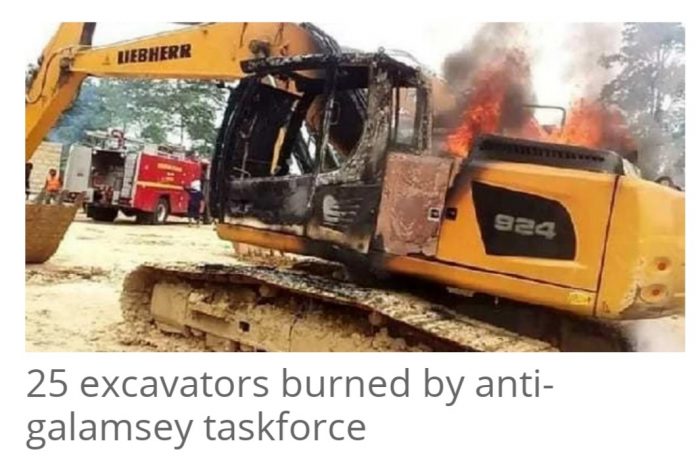 According to eye witness reports, the task force, returned to the site on Monday, May 17, 2021 to burn down a faulty excavator parked in the yard together with a large water pumping machine which had apparently escaped their notice on Sunday.

They set ablaze eight (8) excavators, a bulldozer and dozens of water pumping machines at same site.

The soldiers again set ablaze other excavators which were not properly destroyed during their first visit to the mining site 24 hours earlier.

A worker at the site Nana Asante Boadi Yeboah, narrated what happened to a Starr News reporter.

“because of what they did last three days we were at home when we had calls that they’ve come again, they came and had our two machines re-burnt. So far they’ve burnt about nine to ten machines on our site”.

He also added that about 150 water pumping machines have also been burnt beyond repairs at the site.

In all, some sixteen (16) excavators working for Xtra-Gold, a large scale mining company were burnt down during last Sunday’s operation by the military task force. 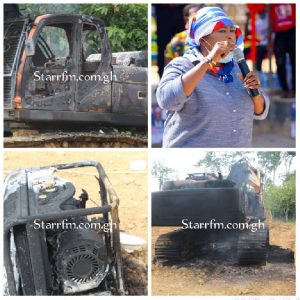 Just when Operation Halt had began its third phase of the ongoing war on Galamsey, a military helicopter was spotted hovering around the area about 500ft in the air on Tuesday, May 18, 2021 at about 4:30pm.

On board the helicopter was the Minister for Lands and Natural Resources, Samuel Abu Jinapor, the Cheif of Air Staff, and the General Officer commanding “Operation Halt”.

They were in the area to assess the situation on the ground and to ascertain the current progress of “Operation Halt” authorised by the President Nana Addo Dankwa Akufo-Addo on April 28, 2021.

A Facebook post by the Minister, said that the entourage also undertook an aerial tour of Rivers Oda, Brim, Offin, and Pra in the Ashanti, Eastern, Central and Western Regions.

“This tour was necessitated to ascertain for myself the current progress of Operation Halt, I must say what I observed was daunting. However, the government of Nana Addo Dankwa Akufo-Addo is determined and committed in our resolve to protect the environment and reclaim degraded land”
He added.

“I also had the opportunity to interact with communities along the river bodies and entreated all to support government’s ongoing efforts to sanitise our forests and water bodies. A concerted effort by all stakeholders is the only way to overcome this menace.”

“Operation Halt” has just began its third phase of the war against galamsey and government claims it has so far yielded very good results.

The Minister for Defence, Dominic Nitiwul in a presser warned all those galamseyers working at night from 9pm to 4am to desist from such activities because the military task force is going to be very relentless in their duties. 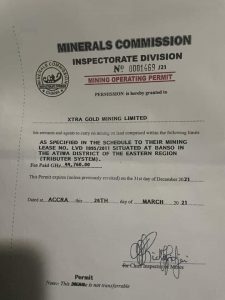