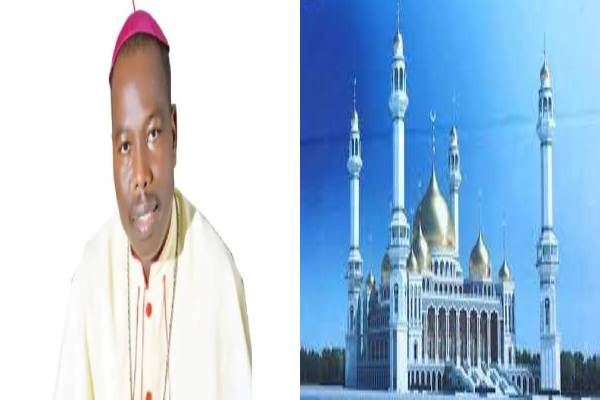 The Bishop of the Catholic Diocese of Yola, Rev. Fr. Stephen Mamza, has explained that he faced opposition when he revealed his intention to build a mosque for the Muslims Internally Displaced Persons in Yola, the capital of Adamawa state in Nigeria.

Rev. Mamza, who made this known in an exclusive interview with The Punch, said in the first place, they did not discriminate against anyone when he and other members of the church played host to the IDPs.

Legit.ng gathered that the cleric said that they didn’t ask what religion the IDPs belong to or ask for their church denomination, adding that the IDPs were treated as human beings who are in need of help.

He said the majority of the IDPs who thronged to their camp were Christians but noted that there was also a large number of Muslims among them. Rev. Manza stressed that if they were able to build houses for all of them, and also built a church for the Christians among them, saying that it is only a matter of justice and fairness that they also provide a space of worship for the few Muslims among them.

“There are about 10 to 12 Muslim families in the camp. I just felt that since we didn’t leave out the Muslims while providing food for the Christians or leave the Muslims out while building houses for the Christians, it is only just that we also build a mosque for the Muslims as we built a church for Christians. It is not something that is commonly done; it is not something that we have heard of being done, especially in our country, Nigeria, where everybody is conscious about their own religion.”